The Development of the Spitfire

(By Trevor Dean, with information courtesy of Military Magazines UK and the Solent Sky Museum Southampton) 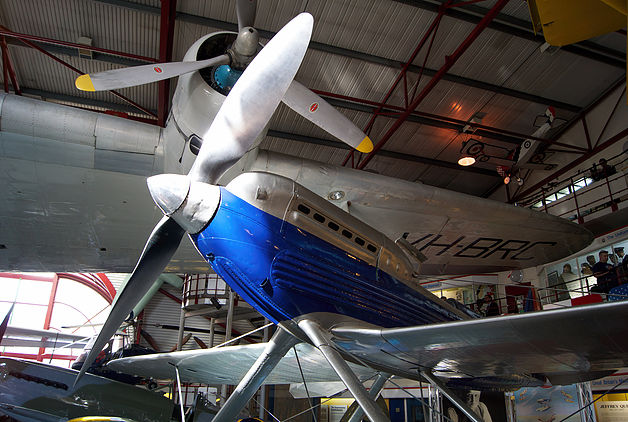 R J Mitchell, the Supermarine Spitfire’s designer, learnt his trade during WWI. He was conscious of the fragility of the early planes, and always considered pilot safety in his designs. Even when designs were optimised for speed, such as those for the Schneider Trophy races, he never sacrificed his concern for the pilot. 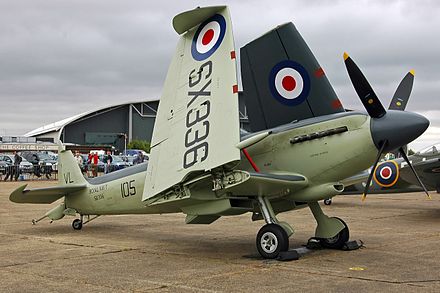 His masterpiece, the Spitfire, proved to be not only a beautiful plane much loved by its pilots, but also a robust and adaptable design.

It was, in fact, so adaptable that it was the only fighter in production before, through, and after the war. It eventually reached Mark 24, some of those marks being specialist Photo Reconnaissance (PR) planes, others reserved for the Navy and christened ‘Seafire’. Versions of the Spitfire were equipped with machine-guns, cannons, rockets, and bombs. It could be used at high altitude or adapted as a ground-attack aircraft.

Two marks were even tried with floats. By the end of the war, it had gone through 13 different designs of propeller. In all, 20,351 Spitfires were produced for the RAF. 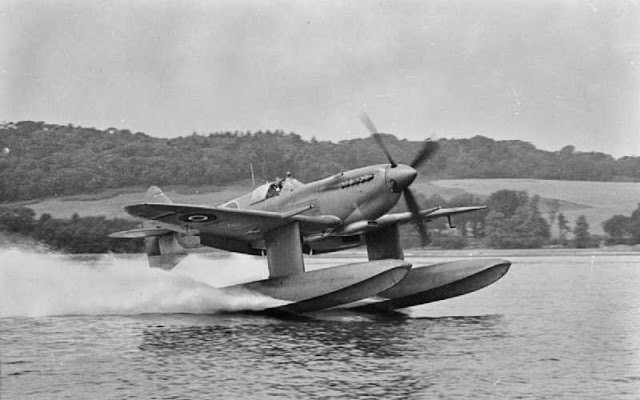 Mitchell’s search for an effective fighter-interceptor did not get off to a very good start. His Supermarine Type 224, with its steam-cooled Rolls-Royce Griffon engine, could only manage a top speed of 230mph, against the Air Ministry’s rather modest specification, F7/30, for an all-metal, four-gun fighter, with a top speed of 250mph.

This ugly duckling was nicknamed ‘Spitfire’ by the managing director of Vickers Supermarine. Mitchell, however, was already working on a much superior design, the Type 300, and went into collaboration with Rolls-Royce, who were themselves, working on a new engine, which would eventually become known as the ‘Merlin’. At first a private venture, it was taken up by the Air Ministry, whose fighter specification, F16/36, would be written around this design. 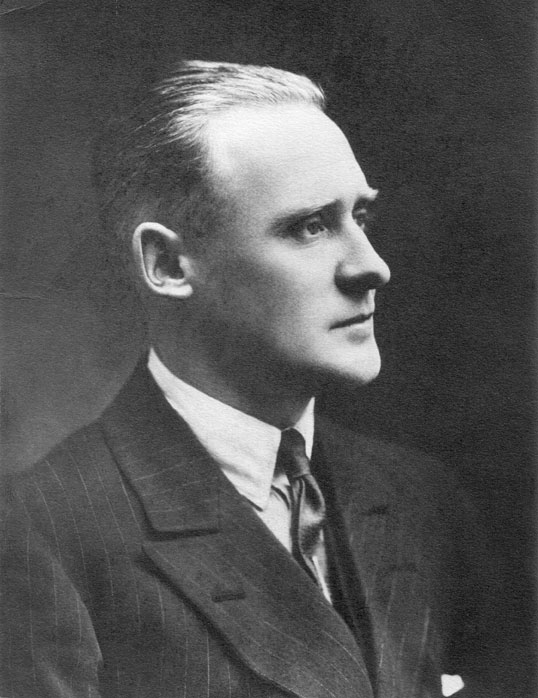 RJ Mitchell - Designer of the Spitfre

Work began on the 300 prototype, Air Ministry registration K5054, in December 1934, and it underwent its maiden test flight at Eastleigh, Southampton, on 5 March 1936, in the hands of Vickers’ chief test-pilot Captain Joseph ‘Mutt’ Summers.

K5054 had a narrow fuselage with wings that tapered to slender tips and were elliptical, and its cockpit was enclosed. Its undercarriage was set close together to lower stress on the wings, and the wheels swung outward to retract flush into wing cavities.

Suspension was provided by ‘oleo’ legs, which were telescopically sprung on oil and air. A tail skid completed the technical arrangements for take-off and landing. The plane was originally fitted with a two blade, fixed-pitch wooden propeller and a Merlin ‘C’ engine. 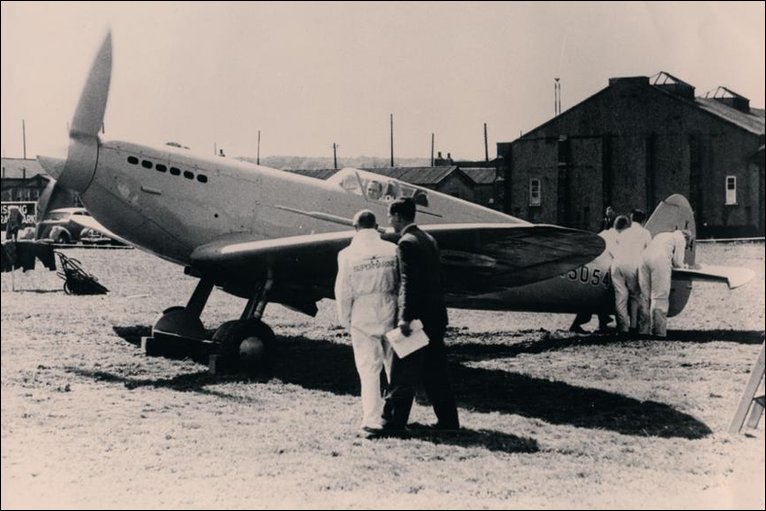 Unfortunately, Mitchell died of cancer in June 1937. He continued to work despite increasing pain, tweaking the design up to the moment of his death – earning himself the posthumous sobriquet ‘the first of the few’ from the makers of his 1942 film biography. Before he died, however, he had seen his prototype fly.

Production design and future adaptations were, thereafter, the work of Mitchell’s long-time collaborator and successor Joseph Smith. It was Smith who oversaw the production trials at Martlesham Heath, but the Air Ministry, impressed with the prototype, had already ordered 310 Spitfires, and, despite the problems with Type 224, the name had stuck.

After consultations with RAF technical experts, the armament for the new Spitfire fighter was settled on 8 Browning .303 machine guns. These were basically Colt .30s manufactured under licence but re-chambered to take the British rimmed cartridges.

They were placed four to a wing, a novel concept at the time, and designed to fire outside the circle of the propeller, doing away with the need for the interrupter gear of earlier aircraft. Smith also simplified the construction and design to make the Spitfire more amenable to mass production, and he finally brought Mitchell’s idea to a practical conclusion when the first Mark I, K9789, officially entered service with No 19 Squadron at RAF Duxford on 4 August 1938 – though the first few planes had only four machine-guns, as there was a desperate shortage of Brownings. 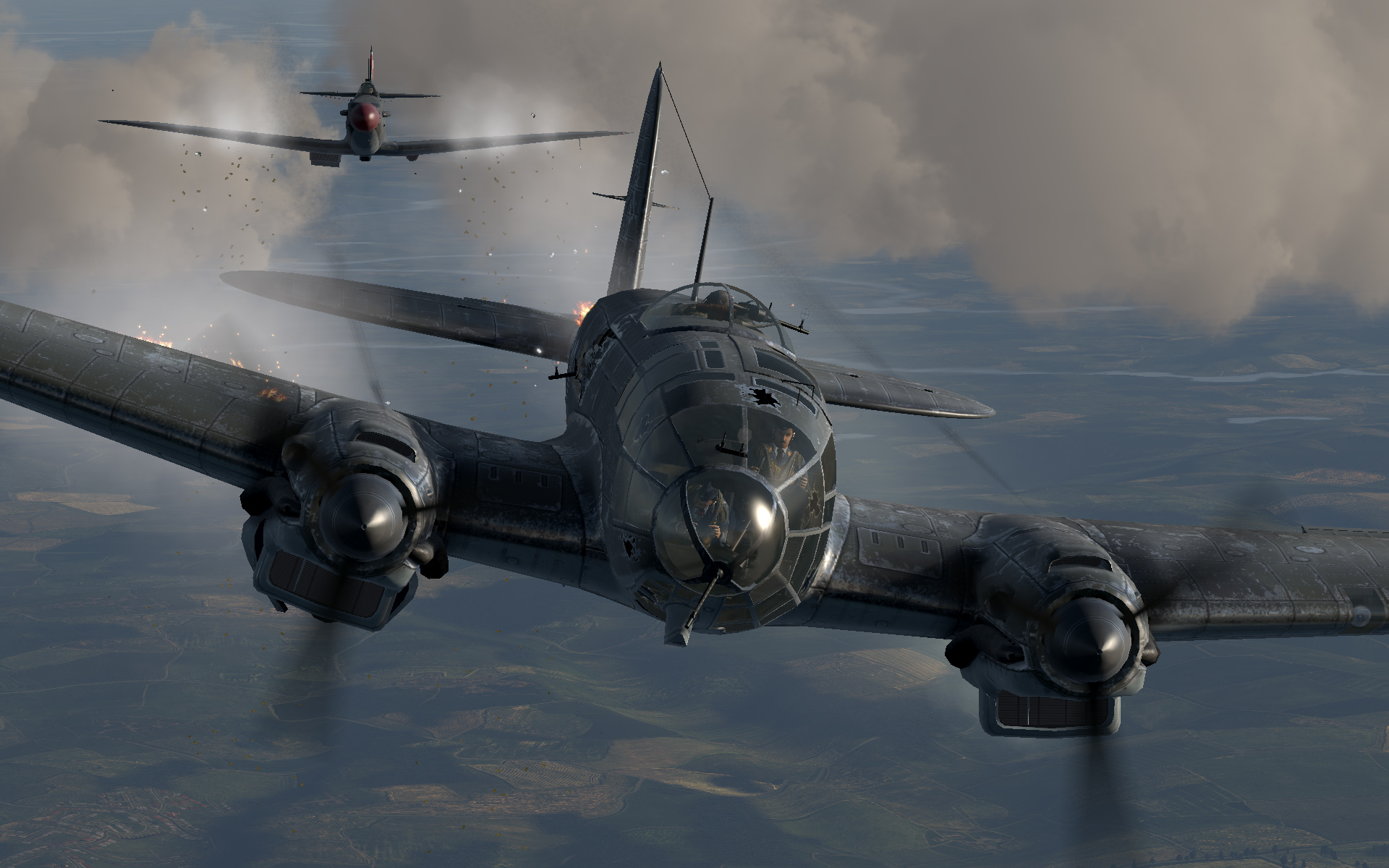 By the time the Spitfire had brought down its first German plane, a Heinkel He 111 bomber over the Firth of Forth on 16 October 1939, several improvements had been made to the Mark I. To its elliptical wings and all-metal ‘monocoque’ body, where the skin is part of the plane’s structure rather than just a covering, had been added the bulged, or blister-shaped, cockpit, thereby completing the Spitfire’s classic profile.

Windscreen plastic had been replaced by armoured glass, armour plate was fitted at the rear of the engine bulkhead, a power-operated pump was installed to operate the undercarriage, and the tail-skid had been replaced by a wheel. The Merlin Mark II engines were giving way to the Mark III with its improved airscrew shaft, and the two-blade wooden propeller had been replaced by the De Havilland three-blade metal, two-pitch propeller, significantly enhancing performance, particularly in the climb.

Most of the Spitfires with which the RAF fought the Battle of Britain were Mark Is, but work had begun on a Mark II as soon as the first model had gone into production, and some were already in service as early as the summer of 1940.

There was little difference between the two marks, the main one being that the Mark II Spitfires were fitted with the Merlin XII engine, rated at 1150hp. The Spitfire Mark II had slower maximum and cruising speeds, but a faster climb rate, being able to reach 20,000ft in 7 minutes, and had an improved ceiling of 32,800ft. The Mark II had better protection for the pilot as well, with increased armour behind the pilot’s seat to protect his head.

Another early development which led to increased Spitfire variety was the production of different wing types to accommodate a range of different armament set-ups. The A wing was the original one designed to hold four .303 machine guns. The B wing was designed to accommodate the newly accepted Hispano-Suiza 20mm cannon, so each wing had one cannon and two .303 machine guns. 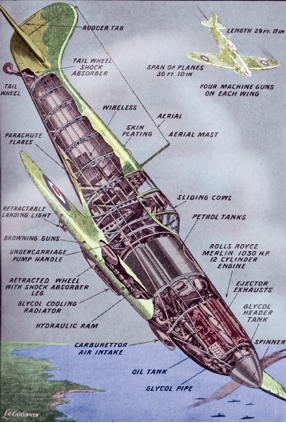 The Spitfre in cutaway view

The C, or ‘Universal’, wing could accommodate either the A or B combinations, or an altogether new combination of two 20mm cannons. There was no D wing, but an E wing was created, which carried a 20mm cannon and a .50in machine gun. Fifty Mark IBs were manufactured, but there were problems with feed to the cannon. By the time the Mark II was ready to enter service, this problem had been sorted. Of the 920 Mark IIs made, some 170 had the B-wing combination.

In the continual program of updating and improving the Spitfire, the next most significant development was the Mark V, and with a production run of nearly 6,500, this was the most common type ever produced.

They were manufactured mostly in the B and C versions. Some with the Universal wing were given four cannons and could carry one 500lb bomb or two 250lb bombs. They were also fitted with drop tanks of 115 or 175 gallons, significantly increasing endurance.

The Mark V Spitfires were powered by the Merlin 45 and 46 engines, producing 1470hp at 16,000ft. These new, more powerful Spitfires were the Air Ministry’s response to the introduction of the Messerschmitt Me 109 F and the Focke-Wulf FW 190 in the spring of 1941, both of which clearly outclassed the Spitfire Mark II. The Mark VAs could reach a speed of 376mph at 19,500ft, at which height the Mark VB’s speed was 369mph, whilst the Mark VCs reached 374mph at 13,000ft.

As plane performance improved on both sides, and as the number of roles aircraft were asked to perform increased, so the Spitfire proved its versatility as a new range of designations was introduced. Those Spitfires designed for high-altitude work were given the preface HF, those for low-altitude LF, and those for normal duties F.

The HFs and LFs were given variations of the Merlin engine specifically designed for their tasks. The HFs were distinguishable by their extra long wing-tips, whereas the LFs had clipped wings.

Developments and adaptations continued to the end of the war, with the Mark IX taking over from the Mk V as the most commonly manufactured plane of the later series, with some 5,500 produced, of which more than 1,000 went to Russia. Increasing numbers of Spitfires were also being sent to the Middle Eastern and Far Eastern theatres. 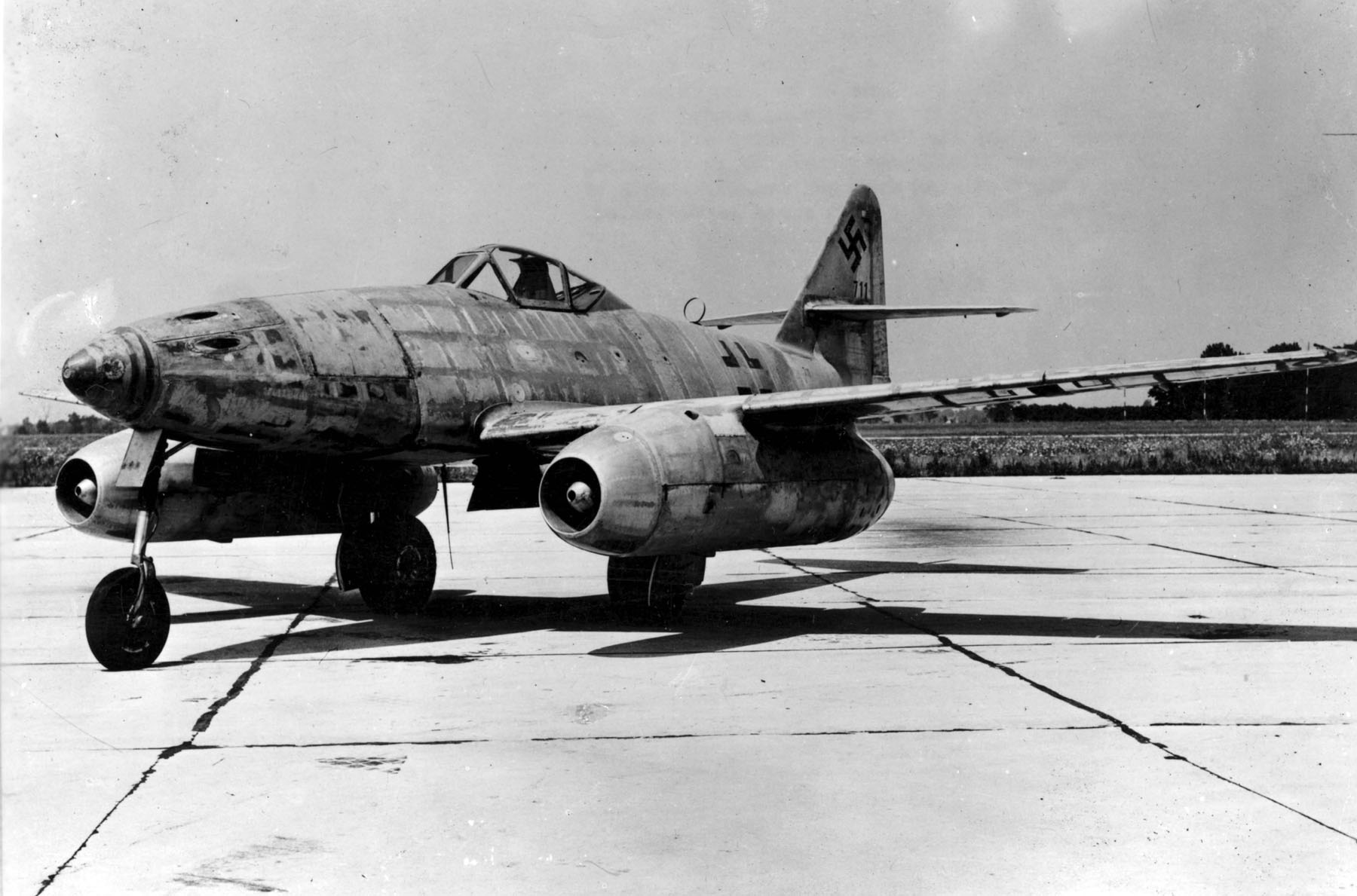 Experiments had been ongoing with the new Rolls-Royce Griffon engines. The first of the production Spitfires with these engines was the Mark XII with the Griffon III or IV, followed by the Mark XIV with the 2050hp Griffon 65, driving a five-blade Rotol propeller. The Mark XIV had a maximum speed of 443mph at 30,000ft, and could reach a height of 12,000ft in just 2 minutes 51 seconds. It was a Mark XIV which was the first Allied plane to bring down a Messerschmitt Me 262, the world’s first operational jet fighter.

The appearance of the Me 262, however, showed the way to the future. After the war, designers everywhere turned to the production of jet-engined fighters. The Spitfire’s postwar service life was brief.