Those of us who grew up with the many aviation adventures of “Biggles” dreamed of one day soaring above the clouds, duelling with the enemy in a Spitfire or Hurricane Fighter

Several years later, at least part of this dream came true for me, albeit not in combat !

On the May 3rd 2018 I took to the skies from London Biggin Hill Airport in Mk IX (2 seat) Spitfire MJ627, for one of the greatest experiences of my aviation life. For reasons I cannot quite fathom, from the moment I sat in the cockpit of that aircraft I felt completely at home.

When the command “You have control” came from Lead Pilot Don Sigournay (he has over 1000 hours on Spitfires), the aircraft and I became one. I loved the Spade control column and soon discovered how sensitive this beautiful aircraft really is. Reg Mitchell’s brilliant wing design made the rudder pedals almost redundant, as even tight turns could be made with control column alone !

The highlight came when we flew over the famous Brooklands Race Track. As there was a vintage car race in progress, Don told me to “beat it up” so I did, dropping the nose and joining the Brooklands Track at low level for few circuits.

Apart from the Biggles Books (I have 60, still 30 titles short), my principal inspiration came from my late friend Alex Henshaw MBE, no doubt known to most of the Spitfire Association members as the Chief Spitfire Pilot at the Castle Bromwich Works during WWII. I first met Alex when he came to Australia many years ago to present the Spitfire Memorial Defence Fellowship.

We corresponded regularly up until his sad passing in 2003. On two occasions I had the privilege and pleasure of spending time with Alex at his beautiful home Abborfield in Newmarket UK. Lining the walls of his home were original paintings by renowned Aviation Artist Michael Turner, depicting various aspects of his aviation career, including having to bale out of a Spitfire during a test flight !

Perhaps Alex was in the cockpit with me (he flew a Spitfire at age 93). I carried a photo of he and I together in my flight suit !

The first step in preparation for my Spitfire flight was to sit in the Briefing Room of the Biggin Hill Heritage Hangar and watch two videos. The first was almost humorous, although very necessary. It gave every possible reason why you Should Not take the Spitfire Flight, including Poor Health, Possible Air Sickness, Other Aircraft Nearby, Possible Engine or Structural Failure (the aircraft was built in 1943) and so on.

Having not been deterred by this video I then watched a Safety Video, detailing : How to converse with the Lead Pilot using Hand Signals should the Radio Fail, how to Attach the Parachute and Belt Harness, how to Evacuate the Aircraft in an Emergency, including how to unlock the Safety Belt Harness and NOT the Parachute, and so on. This was critical to the flight, and I was both tested orally and physically by a Support Crew member and the Lead Pilot before being allowed to continue.

Next came the fitting of my Flight Suit and Gloves, followed once seated in the Spitfire by the obligatory Crash Helmet.

Don had me set the QNH for London Biggin Hill Airport before taxying out for takeoff. Once airborne, Don flew around the area to acquaint me with the location of the Airport in relation to the surrounding area, then gave the much anticipated command, “You have control” !!!

For the next 20 minutes I was able to put the beautiful Spitfire through it’s paces, trying out Steep Turns in both directions, Rapid Descent and exploring the countryside until finally performing a Victory Roll in honour of Alex Henshaw, before reluctantly returning to the Airfield.

Lysle and Nat, I now know at least a little about your experiences in this magnificent aircraft.

- Built at Castle Bromwich, autumn of 1943
- First flown on November 27
- Stored at 9 MU, Cosford until the spring of 1944
- On March 13, MJ627 arrived at General
- Aircraft for further checks which were almost certainly conducted at Hanworth, Middlesex
- Entered service with number 441 (Silver Fox) Squadron, Royal Canadian Air Force (RCAF) on September 25, 1944 and served with the RAF from Advanced Landing Ground B70 located in Belgium. She was given the codes ‘9G-Q’
- First post-restoration flight: November 8 1993 – timed to coincide with its original first flight 50 years previously at Castle Bromwich. In view of MJ627’s operational history it was finished in number 441 Sqn colours, and coded 9G-Q with invasion stripes. 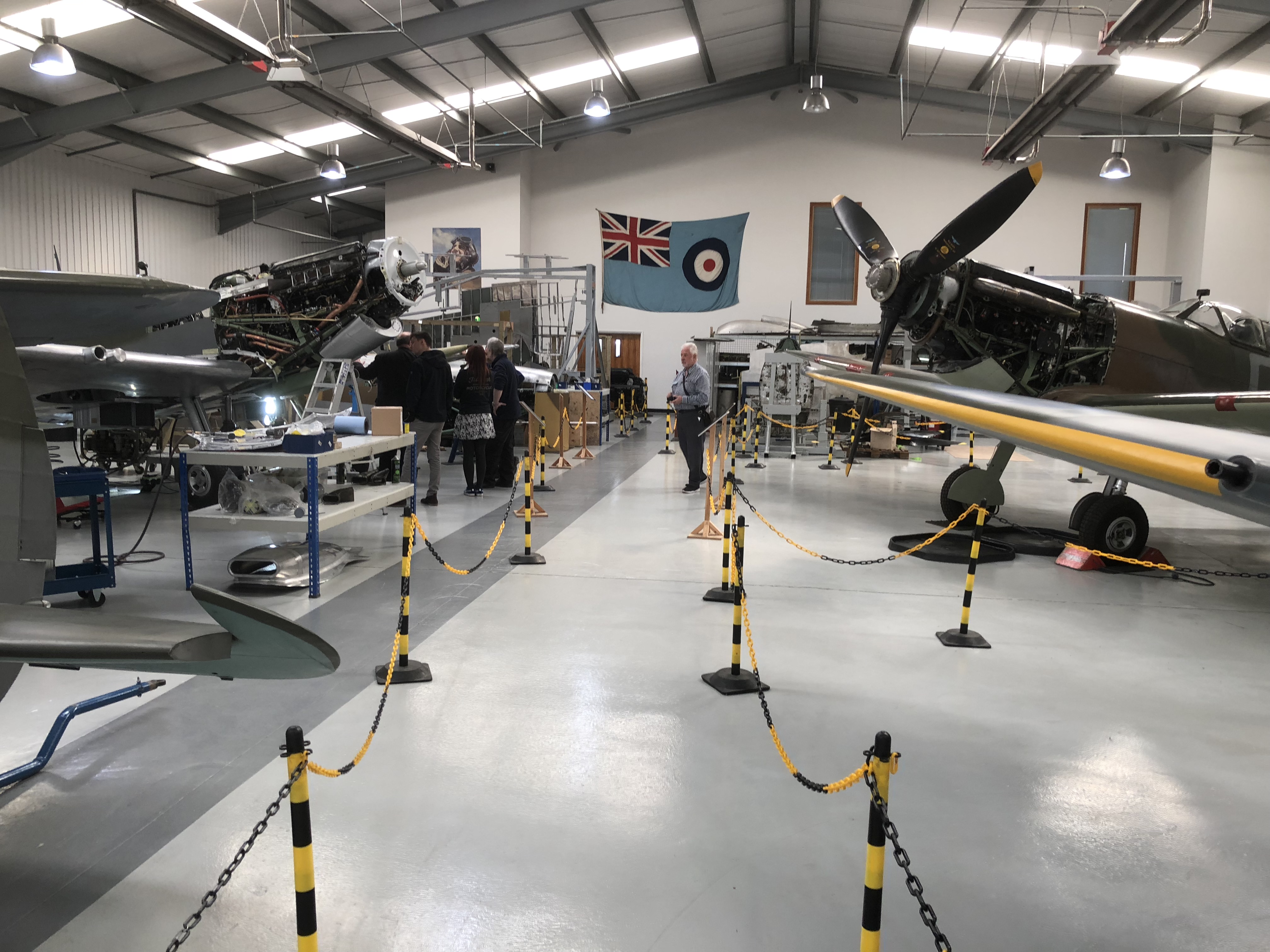 Spitfires under restoration at the Heritage Hangar at London Biggin Hill Airport. 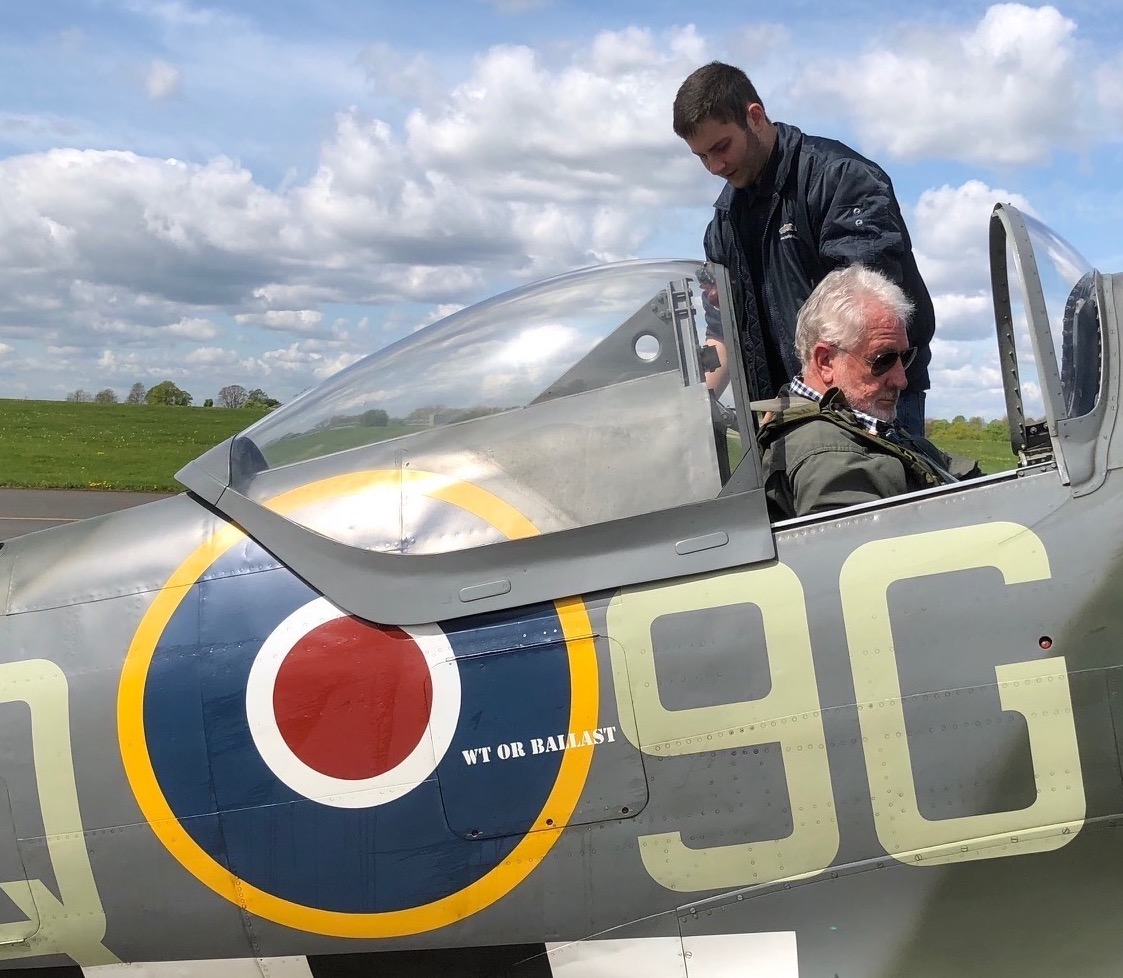 Crew Support Steve making sure I was safely strapped in. 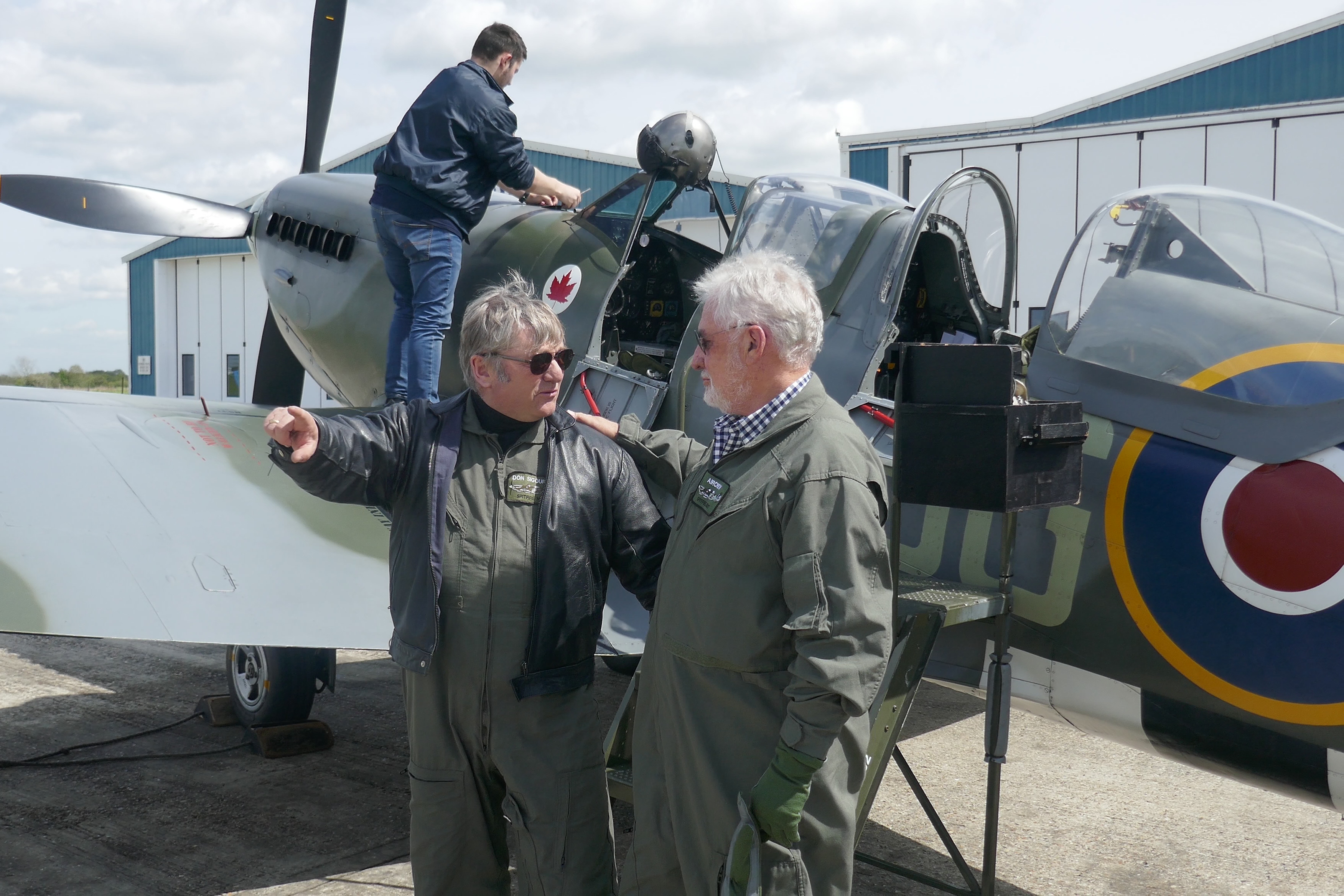 MJ627 Airborne (not my flight) 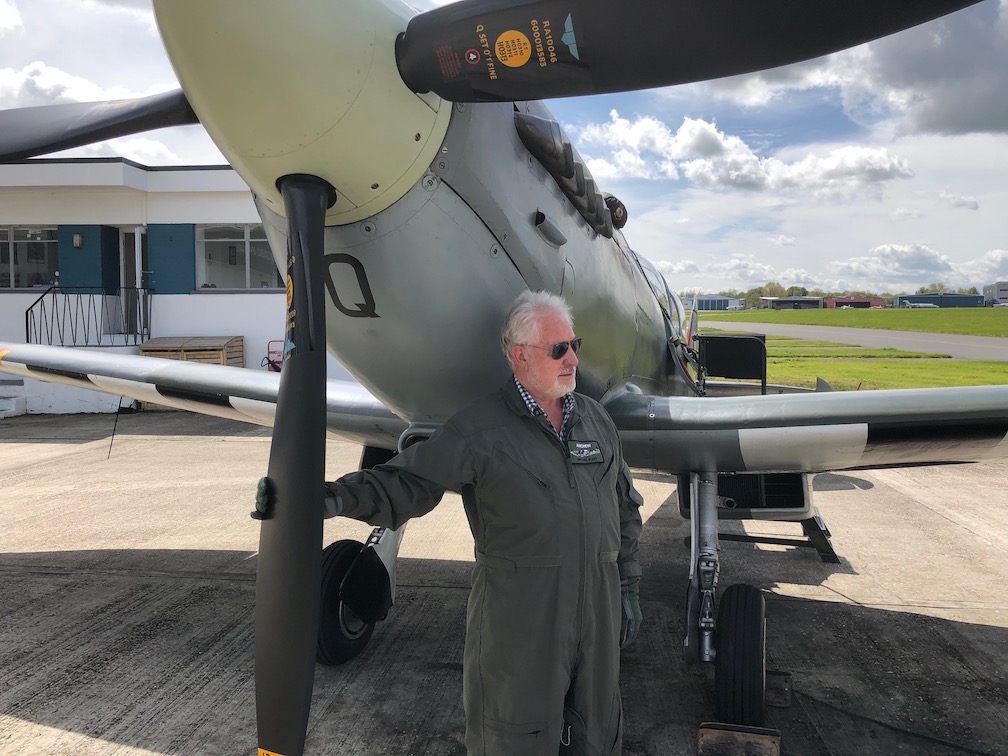 “Posing” by the Prop after the flight 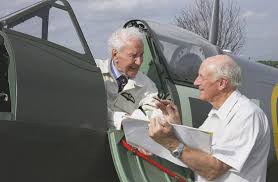 Trevor Dean with Alex Henshaw at his home in Newmarket