Born in Port Pirie, a city and seaport on the east coast of the Spencer Gulf in South Australia, Jack Anastas received his enlistment "marching orders" to proceed to Wakefield Park Adelaide in 1941.

On arrival Jack, then a Foundry Worker and number of other "volunteers" were congregated together. An officer from the Navy introduced himself and spoke about how wonderful the Navy was and if you wanted to join, take one step forward. They would be then sent home until we called.

Next, the Army Recruiter gave his lecture on how great it would be to see action. Volunteers stepping forward would also be sent home until called up.

Then it was an RAAF Officer's turn to offer service in the Air Force. I thought it was great. Silver cutlery, sheets, all the modern commodities, so I took one step forward and waited to hear from them.

Finally, I received my marching orders to proceed to Shepparton, where I was to do my medicals. First up a "short arm inspection" followed by around eleven or twelve injections. That separated the men from the boys, a day I will never forget ! After finishing my medicals, I was posted to Melbourne. I wanted to be a Bombardier because I was colour blind and you are supposed to see the camouflage better than those with normal eyesight. Sadly, I was not accepted.

Then I tried becoming a Dispatch Rider, as I owned a motorbike. I failed on that as well. The Officer riding with me during the test must have been sitting on the side of the side car instead of inside it, and I lost him when I accelerated. Not accepted.

So finally, from a Foundry Worker to a Kitchen Hand. I was posted to Tocumwal, where I learned a lot about cooking and spent several months there before being posted to 3 E.D. Embarkation Centre.

Men were coming from everywhere. We were sent to Strathpine and Petrie, where Spitfire Squadrons were arriving from England. Once we were formed up we proceeded to Darwin. I was on the advance party and we had to erect the accommodation and prepare for the Spitfires arrival. It was the monsoon weather and we were trying to erect the tents atrocious conditions.

Sent to Brisbane, I sat for a Cooking Exam and became a qualified Cook.

Back to Darwin, while waiting for the rest of the Squadron it was hard work. No mobile cooker and in pouring rain. The old saying "When the going gets tough, the tough get going" certainly applied.

Once we were settled in, it wasn't too bad. occasionally I would go out and shoot a kangaroo for fresh meat. Cooking was a difficult job with the equipment we had, and I don't know how we did it. We had 44 gallon drums cut in half cook in. All the vegetables were dehydrated and came in 4 gallon tins. The men got sick of having of powdered scramble eggs nearly every second day.

Once a Smart Alec yelled out "When are we getting fresh eggs?" So one day I confiscated a ping pong ball and cut it up and threw it in with the scrambled eggs. That shut him up !!!

The potatoes were powdered. We had bacon which came packed in butchers salt. We had to soak it in water for several days before you could use it ! Alcohol was hard to get and our ration was one bottle of beer a month, so we had to improvise by making our own. Working in the kitchen we had access to the ingredients and made our own brew stored in 5 gallon porcelain containers. Only one blew up. The brew was so potent we called it Hen Juice - You laid where you drank it !!!

Fifteen months later in the wet season I developed a rash. I was sent to Concord hospital where it was treated. I still have the scars today. While waiting for my travel documents to go back to my Squadron, they gave me a job in the Operating Theatre. I was there until my discharge, a great experience. I was actually thinking of staying on as an Orderly, however a mate had a job with TAA, so with his help that's where I finished up.

When the Cronulla RSL was constructed, I had the privilege to open it as the first Manager. It was not my "kettle of fish", so after sixteen months I took a job as Contract Caterer and was there for eleven years. They would not let me leave! When I finally left, I bought a cattle property at Bellbrook, and after later selling it, went back to catering at Gosford.

I forgot I to mention that I actually invented the Pluto Pup. It cost me ten shillings back in 1947, and I still have the Registration Certificate. These days they are called Dagwood Dogs, sold at all Carnivals around Australia including the (ill fated) Royal Easter Show! (Dagwood dog is a popular Australian festival staple consisting of a hot dog on a stick that is dipped in batter, then deep-fried in hot oil. Before serving, the tip of Dagwood dog is typically dipped in tomato sauce, making it even tastier). 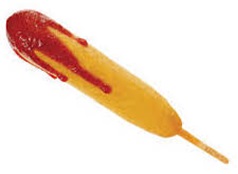 I have been a proud member of Apex and Rotary, and a member of the Lions Club for 50 years !

Editor: For his service to veterans and the community, Jack received an Order of Australia Medal in 2018