The first Lysle Roberts Memorial Series Dinner to be held in Canberra was a resounding success.

It was my honour to host the first Lysle Roberts Memorial function in Canberra on Tuesday 18th February; and it proved to be a most successful event.

Despite nature doing its best to thwart us with record rain, and a thunderstorn on the evening, a distinguished group gathered to hear ACM (Ret’d) Mark Binskin AC relate his career to the 'Battle of Britain' movie and draw parallels to some challenges we face today.

Overall, we took in excess of $6000 on the night. In light of the recent natural disasters, we expect to allocate a good proportion of the profits of the dinner to assisting Australia remain resilient and I will keep you informed of decisions as they are made.

ACM Binskin has been picked to lead the Royal Commission into the bushfires and our dinner was his last public function before taking up the job.

A special thanks to Mark and Gitte Binskin for giving the Spitfire Association their time on Tuesday. A big thanks also to our current SMDF Patron, Chief of the Air Force AM Mel Hupfeld AO, DSC. We also thank Caroline Skidmore who represented her husband and Spitfire Association Patron AVM Mark Skidmore, AM who was in Adelaide as part of the Australian Space Agency launch.

Several Spitfire Memorial Fellows attended and a particular thanks to Dr Robert Dane, CEO of Ocius and one of our most successful Fellows, for whipping up a good crowd from the Ocius friends.

Phil Nickols was splendid in the way he ran the web and Facebook campaign for the dinner. Nothing was too much trouble and his enthusiasm and a head full of ideas made a big difference.

My final thanks go to my wife Karen. Once again, she has given her all to the association. Her immense effort was largely invisible, but was paramount in ensuring everything ran like clockwork.

If you didn’t manage to get to this function, we have ANZAC Day coming up. Information will be sent out shortly. Future speakers at the Lysle Roberts Series this year will include Australian Ambassadors, Antarctic Scientists, experts in disaster recovery and more. Dates are being settled and information bulletins should be with you during the course of February and March. 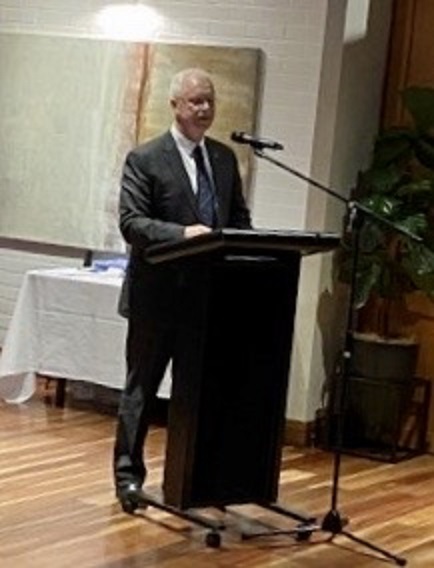