It had taken off at 0530 hrs on an operational flight. Twenty minutes later, it returned to Batchelor and requested landing instructions. These were given and shortly afterwards the aircraft struck the ground apparently during the approach. It disintegrated and burned on impact. George and five others lost their lives in the acccident.

The photo, courtesy of Robert Boyd, is of a Lockheed Ventura A59-89 V. Similar to that in which George was one of 6 killed. Learn more about the squadron/s in which George served. 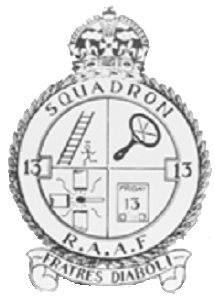 No. 13 Squadron was formed from elements of No. 12 Squadron at RAAF Base Darwin on 1 June 1940. The Squadron initially served in the general reconnaissance role and flew maritim...