He returned to Australia in July and joined No 457 Squadron, Spitfires.

Angus' Combat Report: I was flying as Blue 2 patrolling Cap Griz Nez to Boulogne. We had just completed a left hand turn off Griz Nez when I saw 2 FW 190's at 7 o'clock below flying in the opposite direction. I called to my leader to follow and that I was going down but he did not hear. Black section, whom I could only just see, heard me however but lost sight of me. I chased 2 E/A inland just North of Griz Nez and opened fire at 450-500 yards as I thought I was losing them. They turned left and I was unable to get deflection because I was turning too fast. There was black smoke coming from both E/A but the No. 2 was belching quite a lot more than the No. 1. The No. 2 then broke downwards and I thought he was going to hit the deck as we were only flying at about 1000-1500 feet - I fired 2 long bursts using all my ammunition. I then turned to come out over Ambleteuse, the flak was very heavy and I collected one small hole in the starboard wing. Just as I got out of the flak I was chased by 3 FW 190's. I dropped the jettison tank but they still seemed to close so I turned towards them and in one turn was on their tail but I continued turning and made for home at full throttle and although they still chased me they could not close - these are good aircraft. I claim 1 FW 190 damaged. Sometimes, all that matters is flying. This report reads:

During his instructional tour at this unit, F/O Hayes has displayed eagerness and determination to do a good job. He has fair ability as an officer, which in respect to flying duties is greatly amplified by his enthusiasm towards flying instruction and a personal interest shown in his pupils. He is somewhat deficient in service knowledge which can be attributed to a lack of interest in service matters outside flying duties. Learn more about the squadron/s in which Angus served. 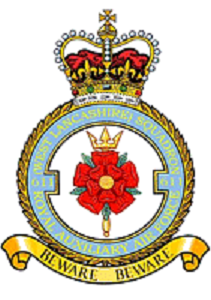 On 1 January 1939, No. 611 became a fighter squadron, receiving its first Supermarine Spitfire Mk.I's in May. The squadron left for RAF Duxford on 13 August. After a period...