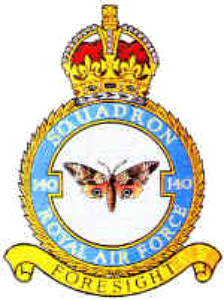 No. 140 Squadron was formed at Biggin Hill on 1 May 1918 as a fighter unit for the defence of the London area and was equipped with Bristol fighters. Due to the lack of German air raids at this time, the Squadron did not go into action and was disbanded on 4 July 1918.

On 17 April 1941, No. 1416 Flight at Benson was renumbered 140 Squadron and one of its Spitfires flew the first photographic sortie of the Squadron on the same day. Blenheims were also used for night reconnaissance missions, the first of these was flown over Cherbourg on 15 November though the majority of work was done by Spitfires. Blenheim operations ceased in August 1942, but some were retained until early 1943, when Venturas were received as replacements.

Few missions were flown by these before the first Mosquitoes were received in August. Spitfires continued to provide photographic coverage over large areas of occupied Europe until 1944, when the last Spitfire sortie was flown on the 27 August and No. 140 became fully equipped with Mosquitoes. Both day and night reconnaissance missions were carried out for the rest of the war but in 1945 night missions were in the majority. In September 1944, the Squadron moved to Belgium to shorten the distance to its operational areas for the rest of the war. In July 1945 it returned to the UK without aircraft and was disbanded on 10 November 1945.