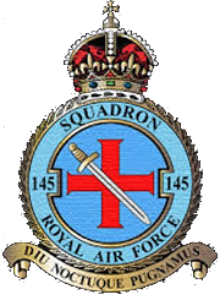 The Squadron formed on 15 May 1918. Equipped with Royal Aircraft Factory S.E.5 fighters, it supported the final offensives against the Turks in Palestine. The unit disbanded on 2 September 1919.

On 10 October 1939, No. 145 Squadron was reformed, taking delivery of Hurricane fighters in March 1940. It operated over Dunkirk and in the Battle of Britain before re-equipping with Supermarine Spitfires in early 1941. From February 1942, it was based in the Middle East

In June 1943, the Squadron moved to Malta to carry out offensive patrols over Sicily and in July, cover the Allied landings. It moved into Sicilian airfields after their occupation and then onto Italy in September 1943. In December, the squadron's Spitfires started attacking ground targets and in June 1944 it became a fighter-bomber unit, remaining so for the rest of the war.