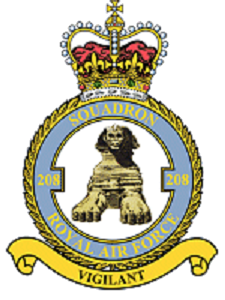 Formed as Number 8 (Naval) Squadron on 26 October 1916 at Dunkirk, the unit was immediately passed to RFC control and flew Pups, 1 1/2-Strutters and Nieuport Scouts on a variety of missions. During 1917, the unit re-equipped with Sopwith Triplanes and then Camels and began concentrating its efforts on artillery on artillery spotting. After a period of relative calm in the UK, the unit returned to France just in time for the German offensive of during spring 1918, and became No 208 Squadron, RAF on 1 April 1918. Eight days later, 16 Camels were destroyed on the ground to prevent them falling into enemy hands ahead of the enemy advance. After a year as part of the occupation forces in Germany, No 208 returned to the UK and disbanded at Netheravon in November 1919.

The Squadron reformed at Ismaila, Egypt on 1 February 1920 with RE8s and then Bristol Fighters on army co-operation duties. The 'Brisfits' were not replaced until May 1930 when the Atlas arrived and shortly before the outbreak of World War II, the unit converted to Lysanders. As with many Middle East-based units, No 208 joined the War proper with the Italian declaration of War in June 1940. A number of Hurricanes were received by the end of the year, and both types were active during the advance through Cyrenaica (now Libya) before moving to Greece to join the ill-fated campaign. The squadron eventually returned to the Western Desert with Hurricanes before moving with the Allied invasion of Italy during 1944.

After the War, No 208 moved to Palestine and in May 1948 became the victim of an unprovoked attack by the Egyptian Air Force. Shortly after, 4 of the Squadron's Spitfires were shot down by Israeli aircraft. No 208 re-equipped with Meteors in 1951 and moved to Malta during 1956 where it disbanded three years later. On 10 January 1958, the unit reformed at Tangmere before returning to the Middle East with Vampires and Hunters some two months later. The Squadron disbanded as part of the British drawdown in the area in September 1971. On 1 March 1974, No 208 reformed Honington with Buccaneers in the low-level strike role and became one of the last RAF squadrons with the type when they were retired in 1994, the numberplate then passing to one of the Hawk squadrons based at Valley as part of No 4 Flying Training School. A pair of Spitfires FR Mk. XVIII of No. 208 Squadron over the Mediterranean. The men of 208 SQN, location and date unknown.