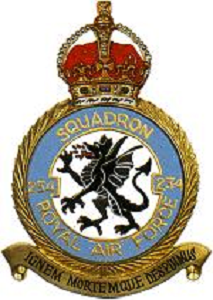 No. 234 Squadron: On 30 October 1939, No 234 was reformed at Leconfield as a fighter squadron. Originally intended for shipping protection duties, it flew a mixture of Blenheims, Battles and Gauntlets until March 1940, when it began to receive Spitfires, becoming operational on 11 May. Throughout the Battle of Britain, it was based in southern England and in April 1941 began sweeps over northern France. These continued between defensive patrols until January 1943, when it moved to the Orkney Islands, returning south in June.

After covering the invasion beaches in Normandy, No.234 converted to Mustangs and began long range escort missions from East Anglia. A few days before the end of the war, the squadron moved to northern Scotland to escort strike Wings operating along the Norwegian coast, but returned to East Anglia in July to convert to Spitfires. These were flown until replaced by Meteors in February 1946, but on 1 September 1946 the squadron was renumbered 266 Squadron.