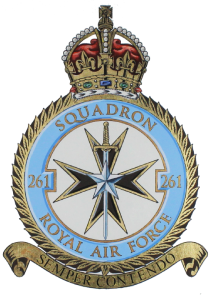 At the start of the Axis onslaught against the island of Malta, there were few fighters available for its defence, but some crated Sea Gladiators were found, which were assembled and formed into the Malta Defence Flight which was raised to squadron status as No 261 Squadron on 1st August 1940, by which time it had also received some Hurricanes. By January the squadron was wholly equipped with Hurricanes, but in May 1941 the squadron was disbanded.

The squadron was reformed on 12 July 1941 at Habbaniya when No 127 Squadron was renumbered and the following month it was a part of the force involved in occupying Iran. After this it moved to Palestine for air defence duties but in February 1942 it was sent to Singapore, but the Japanese advance forestalled this and the squadron found itself in Ceylon. Here it was able to assist in the repelling of Japanese carrier borne attacks against the island.

In January 1943, the squadron was transferred to Northern India, from where it began ground attack operations against targets in Burma. In March 1944 the squadron was withdrawn from operations and began conversion to Thunderbolts. Operations began again in September but in June 1945, it was again withdrawn, this time to prepare for the invasion of Malaya. The dropping of the atomic bombs on Japan negated all plans for invasion and the squadron disbanded on 26 September 1945.