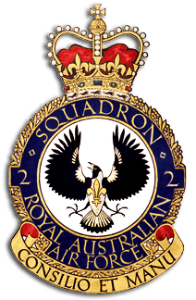 2 Squadron was reformed at Laverton in Victoria on 10 January 1937. At the outbreak of the Second World War the unit searched for enemy vessels in Australian waters using Anson aircraft. After being re-equipped with Hudson aircraft, the squadron moved to Darwin in April 1941 to perform anti-submarine activities and general reconnaissance.

A detachment of four aircraft was sent to Koepang on 7 December 1941 and then to Penfoei on 11 December. The detachment provided cover to Australian troops moving within the islands and attacked Japanese shipping at Menado and Kema early the following year. A Japanese bombing raid on the Koepang base on 16 January damaged a number of planes. Further losses of aircraft, equipment, and men saw the detachment withdrawn to Darwin on 20 January 1942 and to Daly Waters on 18 February.

A total of 13 crew members were lost during 1942, the squadron’s most active period of operations. Between May and October 2 Squadron attacked Japanese positions and shipping at Ambon, Timor, Koepang, and other islands in the Banda Sea. For this work the Squadron was awarded the US Presidential Unit Citation for “outstanding performance of duty in action”.

In 1943, as the Allies gained control of the sky, 2 Squadron made daily attacks on Koepang, Lautem, Penfoei, and Dili. Training on Beaufort bombers commenced late in the year. Working in concert with other units, the squadron opened the new year with attacks on enemy shipping and villages in Timor used by the Japanese and native informers. A combined attack on a Japanese convoy on 6 April saw a cruiser and several other vessels seriously damaged. Between May and June 1944 the squadron was withdrawn from operations and re-equipped with Mitchell aircraft, commencing its first operations on targets in Lautem West on Timor Island on 27 June 1944.

The end of 1944 was spent targeting enemy barges and freighters, now relied upon to supply their outer garrisons. In early 1945 these tasks were continued in conjunction with 18 Squadron. 2 Squadron moved to Borneo shortly after the end of the war and played an important role in locating prisoner-of-war camps and dropping supplies to camps in the Celebes. The squadron assumed transport operations until it moved to Laverton in December, when it was reduced to a cadre basis and eventually disbanded on 15 May 1946.