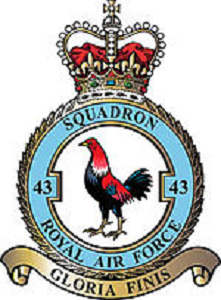 Few squadrons can match the history of 43 Squadron which has included being the first to undertake ground attack operations during the First World War, achieving the remarkable double of having two of its pilots shoot down 6 enemy aircraft in one day during the First World War and shooting down the first enemy aircraft over England in the Second World War. Its distinctive Fighting Cock emblem was adopted in 1926 when 43 was equipped with the Gloster Gamecock and embodies the spirit and resilience of a fighter squadron that has been in the vanguard of RAF operations for almost a century. Perhaps the Fighting Cocks' finest period occurred during the Battle of Britain when its Hurricanes destroyed 60 enemy aircraft with a further thirteen ”probables” and twenty-five more damaged.

One of the 43 Squadron intruder pilots, Godfrey Ball, recalls a particular problem about flying a Hurricane with drop tanks:

"This extra 90 gallons just about doubled our endurance in flying time. I always aimed to use this extra fuel up first. As we had no gauges for these extra tanks, it was necessary to time how long they had been in use very carefully for, if they ran dry, one was likely to get an air lock in the fuel system which, while not being disastrous, was very frightening, especially at night.

The Hurricane was fitted with a 28 gallon gravity tank which, when turned on, got rid of air locks very quickly, and it was fitted mainly for this purpose as air locks could also be caused by draining the main wing tanks. I allowed for a consumption of 60 gallons per hour so, when they had been on for an hour and a half, I would operate on the normal tanks. When actually in an area of possible combat, I always used the wing tanks rather than the auxiliaries.

One night over France, I ran the long range tanks dry by mistake and got an awful fright. I was only at about 500 feet when the red fuel warning light came on like a huge beacon in the darkened cockpit and, at the same time, the engine faded out. I had turned the reserve tank on in less than a spilt second but, although the engine responded quite readily, it seemed to me that it would never come good. It was only then that I found out how long 'immediate' could be, for the good book said that under such circumstances turning the petrol cock on to 'gravity' would bring an immediate response!"

The price of having drop tanks was a certain loss of manoeuvrability. As 43 Squadron Jack Torrance notes: "The old Hurricane gave a feeling of great reliability and steadiness, although it was sluggish in the air with the drop tanks full".