No. 452 Squadron RAAF was the first Australian squadron formed under Article XV of the Empire Air Training Scheme (EATS) in Britain during the Second World War. Its first personnel gathered at RAF Kirton-in-Lindsey on the 8th of April 1941, where the Australians received instruction from a RAF veteran of the battle of Britain, Flight Lieutenant Bernard ‘Paddy’ Finucane. The squadron became operational under 11 Group of Fighter Command on the 22nd of May of that year, flying Supermarine Spitfires. In late July 1941, the squadron moved to Kenley airfield, just outside London.

Part of 11 Group of Fighter Command, 452 Squadron operated from a series of airfields in south-eastern Britain. The focus of its operations were the skies above occupied France and Belgium, where it escorted bombing raids and conducted sweeps to engage enemy aircraft. The squadron was also employed to conduct defensive patrols over Britain and the English Channel. During its first year of operations 452 Squadron established itself as one of the most successful squadrons in Fighter Command, destroying 62 enemy aircraft and damaging another 17. Its aircraft also severely damaged a German destroyer with a strafing attack mounted during the “dash” through the English Channel made by the German battle-cruisers Scharnhorst, Gneisenau and Prince Eugen on 11 February 1942.

In March 1942, Squadron Leader Keith "Bluey" Truscott - who was to go on to become the RAAF's second highest scoring ace - claimed No 452 Squadron's last victory in the European theatre. During its 13 months in England, No 452 Squadron had - for the loss of twenty-two pilots - been credited with destroying nearly seventy German aircraft, and damaging a further seventeen.

452 Squadron were involved in many different kinds of operations. One of the most unusual was escorting a bomber that — with the co-operation of the Germans — dropped an artificial leg by parachute into Europe, for the use of the British ace Douglas Bader, who was a prisoner of war. The bombers flew on to bomb a factory.

Another notable operation was the attack on the German warships Scharnhorst, Prinz Eugen and Gneisenau which were attempting the "Channel Dash", from their French harbour. Allied aircraft inflicted severe damage to these ships, despite intense anti-aircraft fire. The squadron did not lose an aircraft or suffer any damage to it on this occasion. Keith Bluey Truscott was awarded the Distinguished Flying Cross (DFC) for this action. Truscott was perhaps the best-known of the squadron's fliers. Although it was an RAAF unit, while it was in Europe, 452 Squadron also had some British personnel, from the Royal Air Force as well as other British Commonwealth air forces and other nationalities. One of these was the Irish ace Paddy Finucane.

A number of Polish pilots also flew with the squadron and proved to be formidable pilots, despite occasional language problems.

In March 1942, 452 Squadron replaced its sister, 457 Squadron, at RAF Andreas, Isle of Man, where it remained until British Prime Minister Winston Churchill agreed to an Australian Government request to dispatch three fully equipped Spitfire squadrons to Australia to reinforce the RAAF. The squadrons selected were the Australian No. 452 and No. 457 Squadrons as well as the British No. 54 Squadron RAF. 452 Squadron sailed for home on 21 June on board the MV Stirling Castle, which was also carrying the men of No. 457 and No. 54 Squadrons. Stirling Castle arrived in Melbourne on 13 August, and re-assembled at RAAF Base Richmond, New South Wales on the 6th of September. The squadron began refresher training at Richmond, using a varied collection of aircraft because its Spitfires had been commandeered in transit by the Royal Air Force in the Middle East.

452 Squadron became operational again on the 17th of January 1943. Re-equipped with Spitfires, it was based at Batchelor Airfield in the Northern Territory and there joined No. 1 Wing RAAF, which defended Darwin from Japanese air raids. The squadron was relocated to Strauss Airfield on the 1st of February and, with the exception of a brief period between 9th and 27th of March 1943 when it was deployed to RAAF Base Pearce to reinforce the air defences of Perth, it remained there (Strauss Airfield), protecting Darwin, until the 30th of June 1944, in May 1944 having become part of No. 80 Wing RAAF.

On the 1st of July 1944 the Squadron moved to Sattler Airfield in the Northern Territory. The protection of Darwin had been handed over to two Royal Air Force squadrons, allowing 452 Squadron to be employed in a ground attack role for the rest of the war. Initially the squadron operated against targets in the Dutch East Indies from Sattler Airfield, but on the 11th of December 1944 it joined the 1st Tactical Air Force and was relocated to Morotai in the Dutch East Indies, to support the Australian operations in Borneo (Kalimantan). The ground staff established themselves quickly at the newly captured Juwata airfield on Tarakan on the 10th of May 1945, but the state of the landing field was such that it was not fit for the aircraft of the squadron until the 29th of June. Following the landing at Balikpapan on the 1st of July a detachment of 452 Squadron Spitfires moved there on the 15th of July, to support the land campaign. The squadron’s last sortie of the war was flown on the 10th of August 1945 and it disbanded two months later at Tarakan on the 17th of November 1945.

Near Morotai Island, Halmahera Islands, Netherlands East Indies. 1944-12-30. Six pilots of the famous No. 452 (Spitfire) squadron RAAF which was among "the few" in the battle of Britain and is now serving at Morotai in the south-west Pacific find time for some mild formation practice during an afternoon hunt for "targets of opportunity" in the Halmahera's area. The leader is 408970 Lieutenant L. S. Compton of Caulfield, Vic, in camouflaged Mark viii (c) aircraft coded QY-T. A 452 SQN Spitfire on Millingimbi Island, N.T., with FSGT Duncan Spitfires from No. 452 Squadron taking off from Kenley Airfield, UK, for France, 1941 A Supermarine Spitfire Mk IIA of No. 452 Squadron RAAF landing at Kirton-in-Lindsey, Lincolnshire, over other aircraft parked in the 'B' Flight dispersals.

Pilots of No. 452 Squadron: Brendan "Paddy" Finucane (centre), Keith William "Bluey" Truscott (left) and Raymond Thorold-Smith (right). 1941, Kirton in Lindsey. 452 carried the code letters "UD" and the aircraft behind the pilots is a Spitfire Mk. V"Paddy" Finucane was an Irishman who became one of the most decorated Spitfire aces during the Battle of Britain. On April 15, 1941, Paddy crossed paths with one of Germany's highest decorated pilots in history, Oberstleutnant Adolf Galland, shooting up his aircraft so badly that Galland had to bail out on his return route short of the French coast.Bluey Truscott became one of Australia's best-known flying aces of the Second World War. An RAAF pilot, Truscott was commissioned in February 1941, and then ordered to England where he joined No. 452 Squadron as a foundation member on 5 May. Flying a Spitfire Mk. V, he scored his first victory in August. Thorold-Smith nicknamed "Throttle" was another Australian and a founding member of No. 452 Squadron. A tall man, at 6'3", he had trouble fitting into the confines of a Spitfire cock-pit. All three pilots became aces and advanced rapidly to the rank of Squadron Leader (Paddy became Wing Commander). Sadly, their careers didn't last long: Finucane was shot down and killed over the Channel on 15 July 1942. The other two went to Australia but were both killed in March 1943. 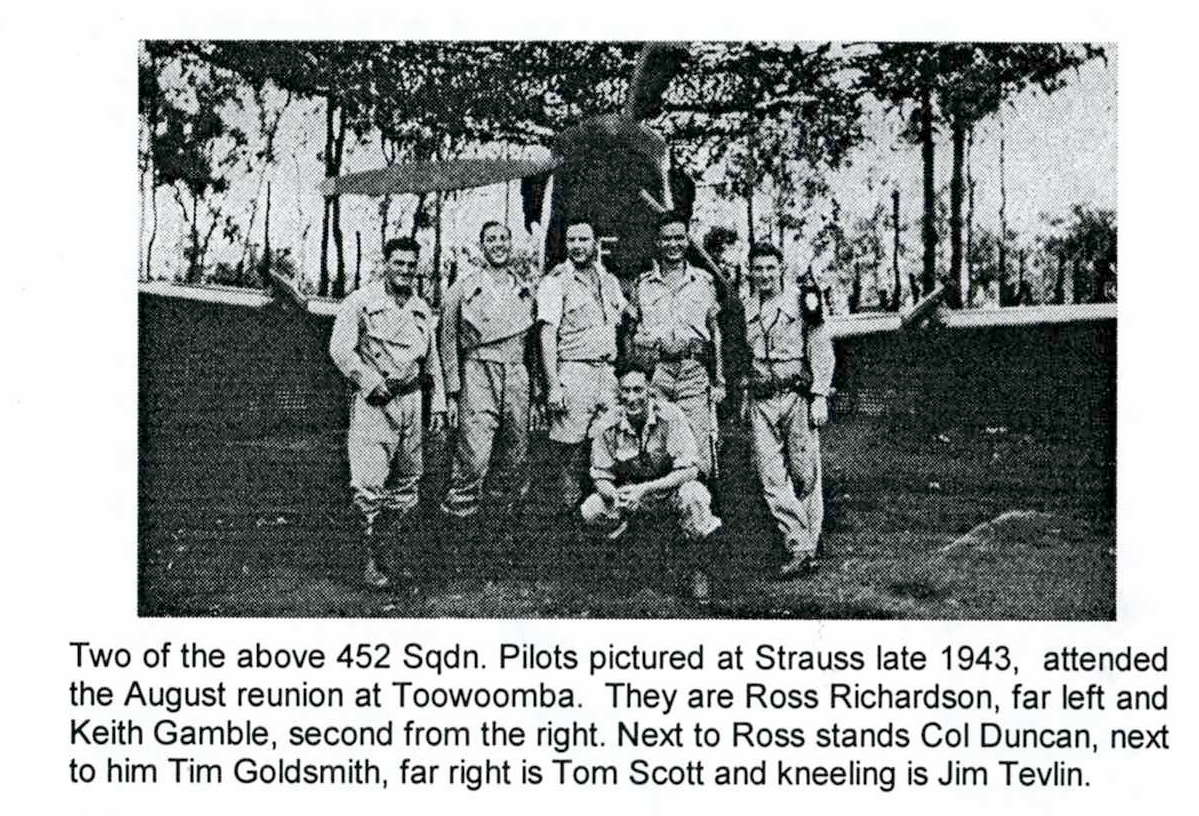 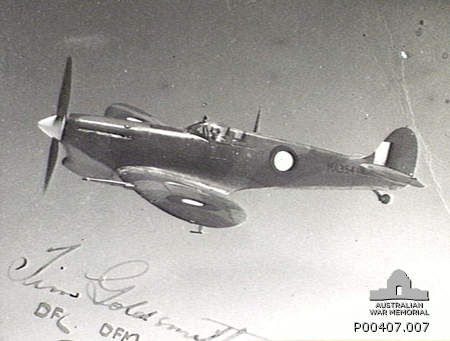 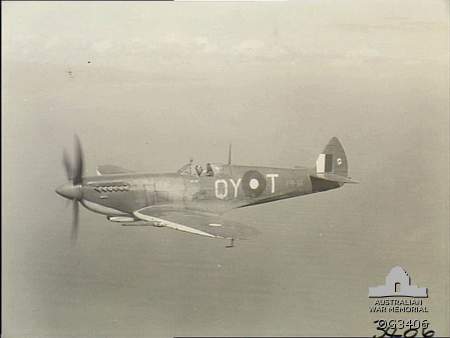