No. 453 Squadron, Royal Australian Air Force was formed at Bankstown in New South Wales on 23 May 1941. Formed under Article XV of the Empire Air Training Scheme, the squadron was destined for service overseas with Britain’s Royal Air Force.

The squadron had departed Australia without aircraft and arrived in Singapore, in two contingents, on 15 and 21 August 1941, where it was equipped with obsolete Brewster Buffalo fighters. These aircraft had been found to be no match for German aircraft in Europe and were shipped to Singapore under the assumption that Japanese aircraft would be far inferior. They were not. Following the Japanese invasion of Malaya on 8 December 1941, 453 Squadron was deployed to forward airfields at Ipoh and Kuala Lumpur. It valiantly strove to support the ground troops by providing air cover and attacking Japanese troops and transport, but suffered grievously in doing so.

With just three serviceable aircraft remaining, its fleet having already been replaced once, 453 Squadron withdrew to Singapore on 24 December. Merged with the RAAF’s 21 Squadron it continued to operate as the Japanese advanced relentlessly toward the island. 21 Squadron was evacuated from Singapore on 26 January 1941, leaving 453 the only operational squadron on the island. It fought on with just six Buffaloes until it was ordered to evacuate these to Sumatra on 5 February. The ground crew left by ship the next day, bound for Java. With no replacement aircraft or spares available in the theatre, 453 Squadron could not again be made operational. It landed at Adelaide on 15 March 1942 and immediately disbanded.

453 Squadron was given a second lease of life at Drem, near Edinburgh, in Scotland on 18 June 1942. It was reformed with new personnel, equipped with Supermarine Spitfire aircraft, and joined the RAF’s Fighter Command. Operating from a series of airfields in the United Kingdom, 453 Squadron rapidly became a capable multi-role fighter squadron. It provided defensive air patrols over Britain and surrounding waters, escorted bombers over enemy-controlled Europe, and conducted offensive strikes in its own right attacking targets on both land and sea.

After the invasion of western Europe in June 1944 the squadron, although remaining based in the United Kingdom, frequently staged through forward airstrips near the front line to increase its range and the time it could spend in the operational area. From November 1944 to March 1945, 453 Squadron was heavily engaged in striking at assembly and launch sites used by the Germans in their V2 rocket attacks against Britain.

On 2 May 1945, the squadron escorted the aircraft that returned Queen Wilhelmina to The Netherlands after three years in exile in Britain. This was 453 Squadron’s last mission of the war; Germany surrendered six days later. The squadron remained in Britain for several months before deploying to join the British occupation forces in Germany on 29 August. It was planned that 453 Squadron would form part of a long-term Australian presence with the occupation forces, but a lack of volunteers for an extra year’s service made this impractical and 453 Squadron disbanded at Wunsdorf, Germany, on 21 January 1946. 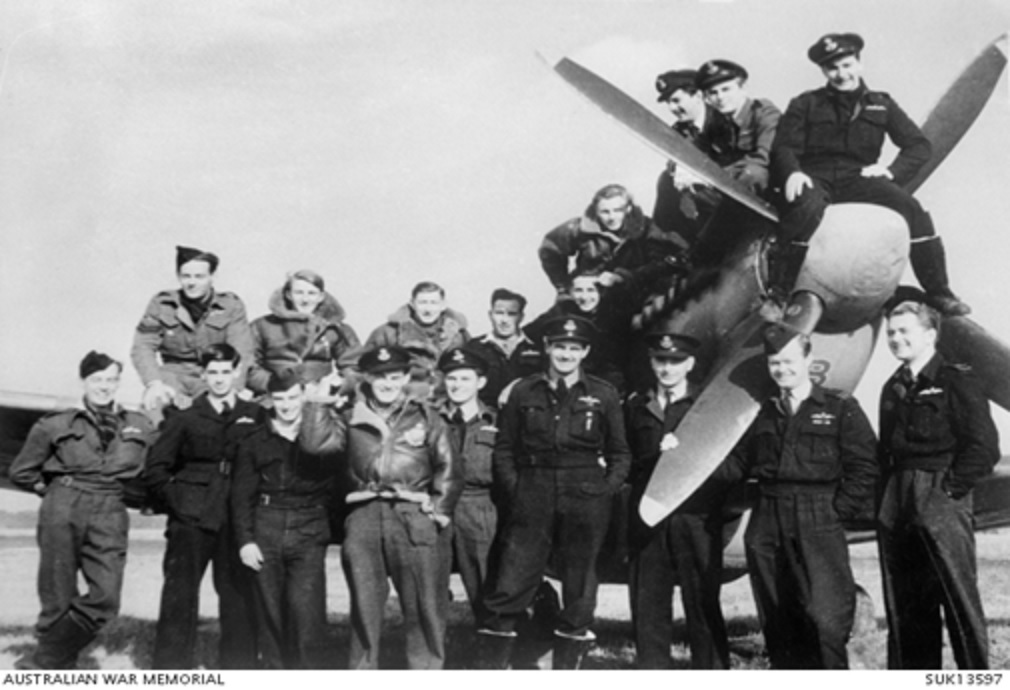 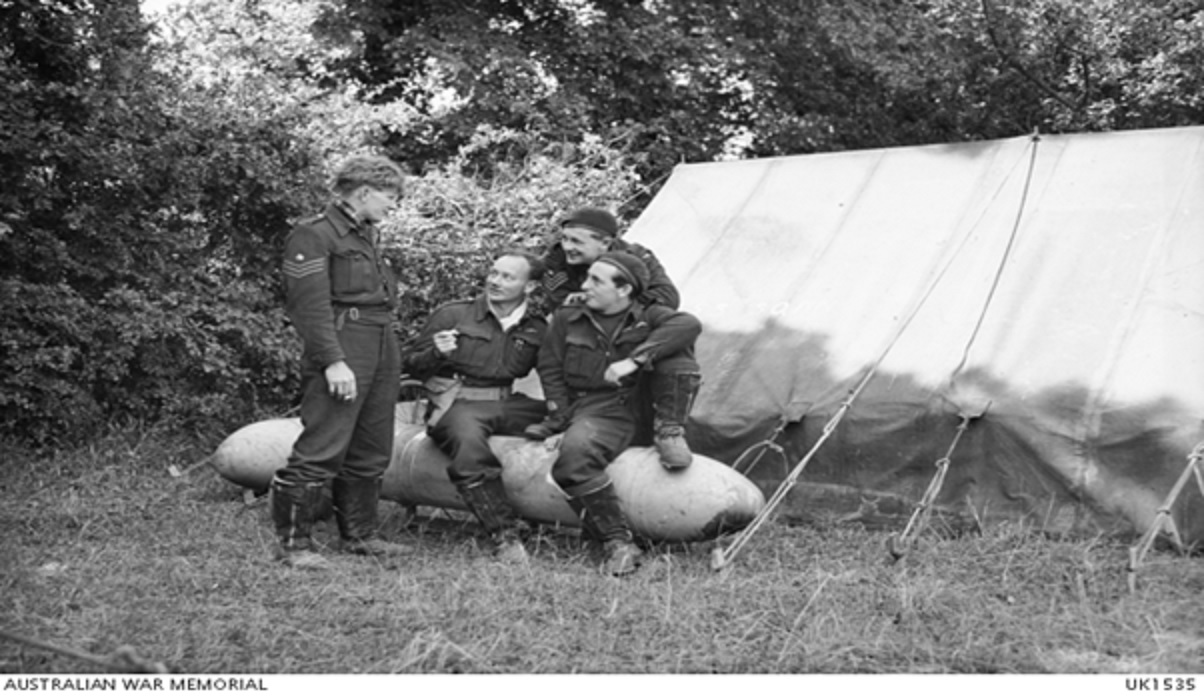 STATION FORD. Informal outdoor portrait of pilots from No. 453 (Spitfire) Squadron RAAF using a spare belly tank as a resting place outside their tent at Beach-Head Airstrip, an advance landing ground, B.11, from where they operated over the Normandy battlefield. Identified from left to right: 425139 Flight Sergeant (Flt Sgt) Allan William Dowding from Goondiwindi, Queensland; 412513 Warrant Officer (WO) Allan Harold John Harris from Yenda, NSW (killed on flying operations over France on 27 July 1944); 418083 Flt Sgt Ralph Alan Dutneall from Hawthorn East, Victoria (killed on flying operations over France on 27 July 1944); and 409367 WO Hector Deeble Aldred from Bentleigh, Victoria (later Flying Officer). 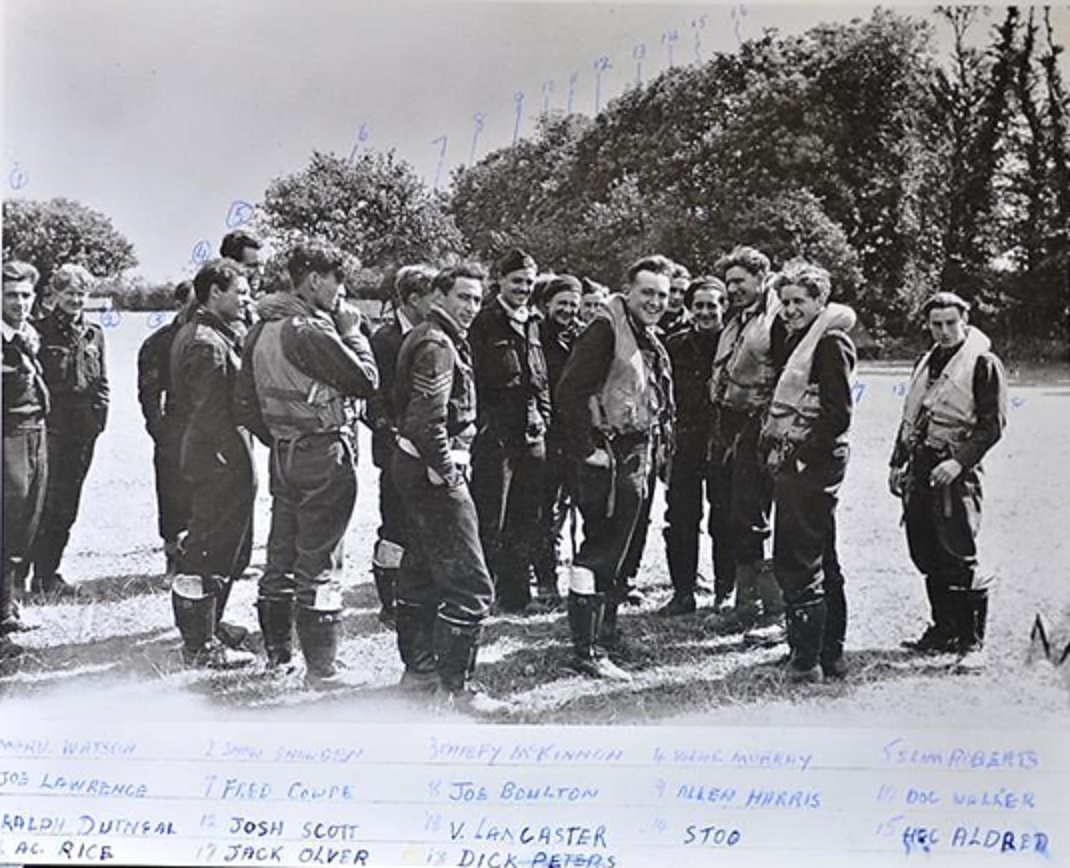 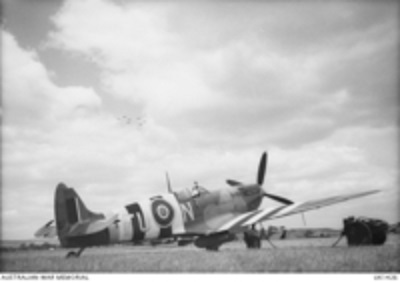 Ford, England. 1944-06-06. A Spitfire of No. 453 Squadron RAAF on D-day being prepared for take-off for close-support operations with the assaulting ground forces. All allied aircraft at this time, with the exception of four-engine bombers, were painted with distinctive black and white stripes for easy identification No. 453 Squadron, Royal Australian Air Force, was formed at Bankstown in New South Wales on 23 May 1941. Formed under Article XV of the Empire Air Training Scheme, the squadron was destined for service overseas with Britain's Royal Air Force. 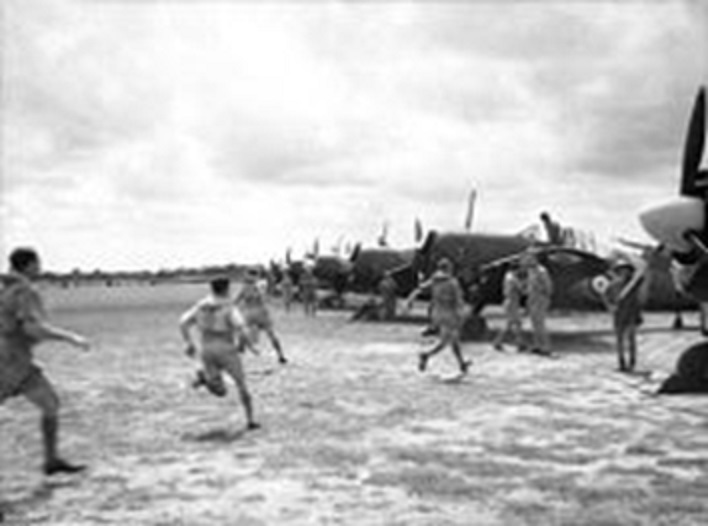 Pilots of No. 453 Squadron RAAF responding to a scramble order. 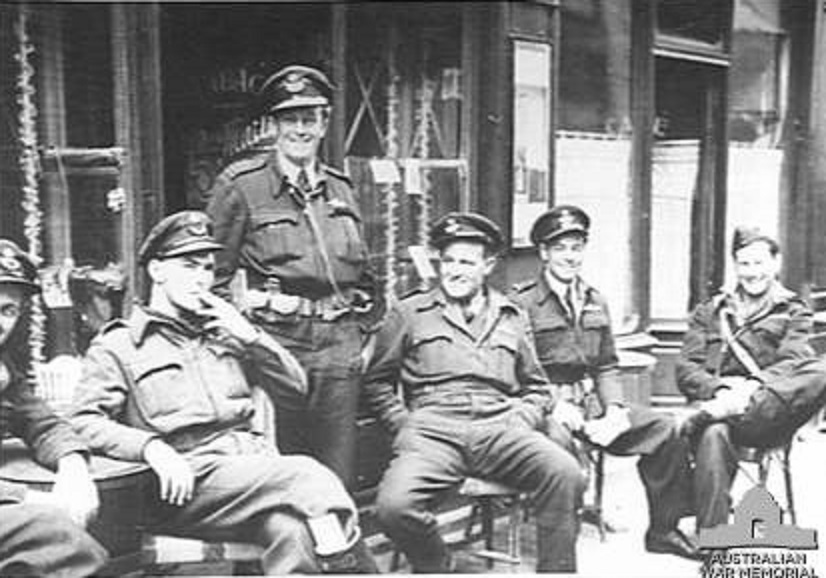 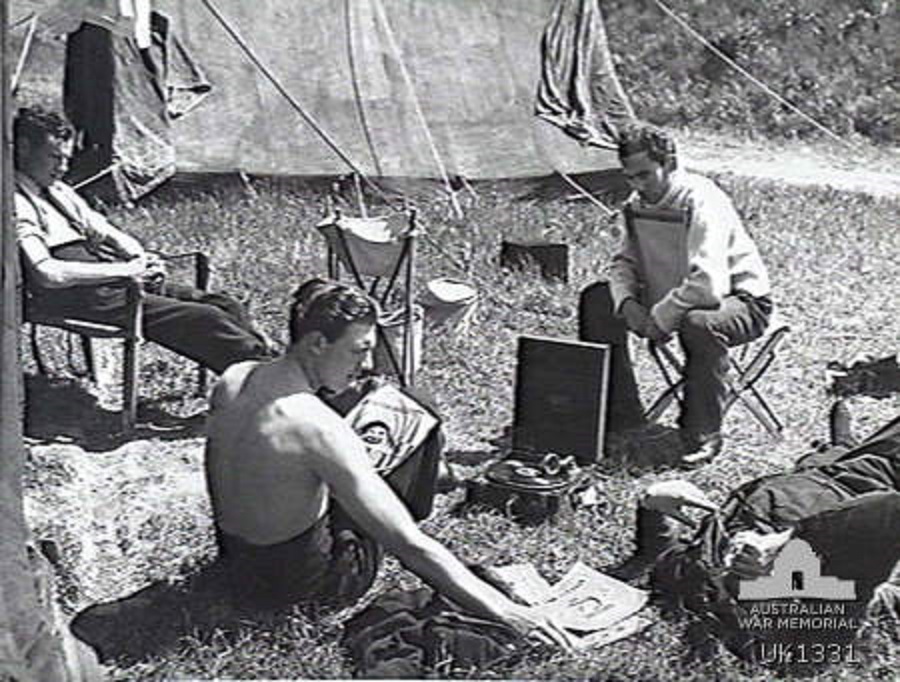 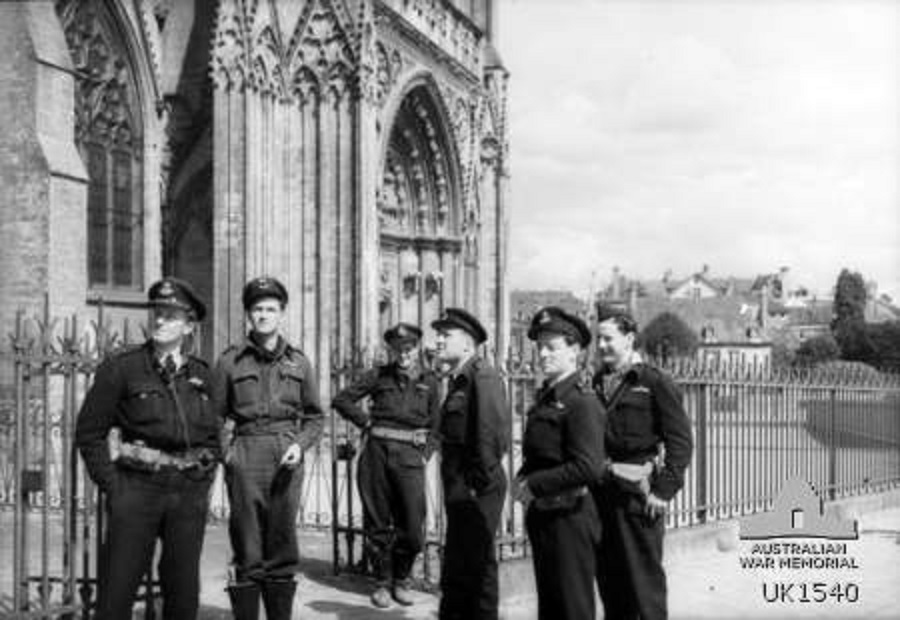 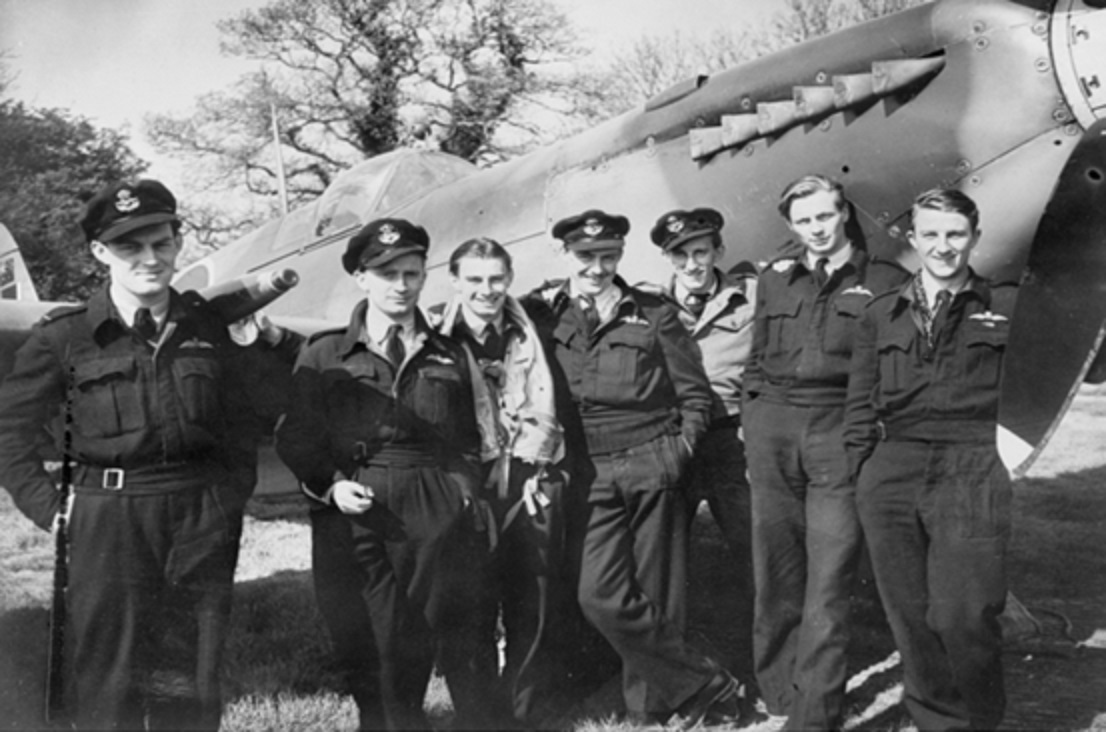 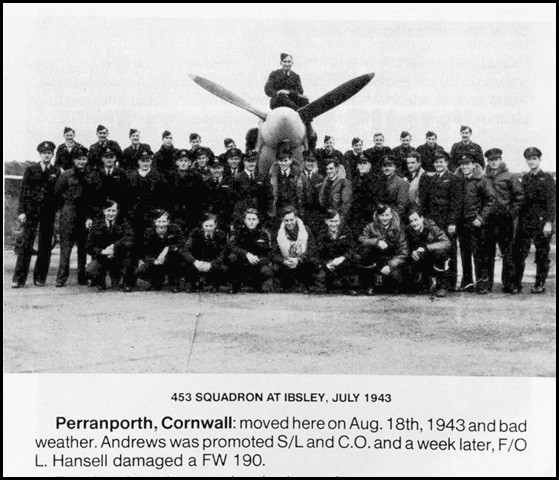 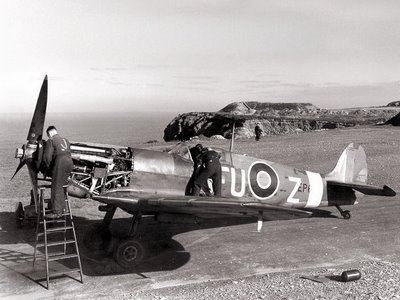 Spitfire Mk. Vb of No. 453 Squadron RAAF undergoing maintenance, autumn 1943. The place is most probably Perranporth, Cornwall, indicated by the proximity of the sea and the magnificent cliffs in the background. No. 453 Squadron was stationed there between 20th August and 15th October, 1943 as part of 10th Group.