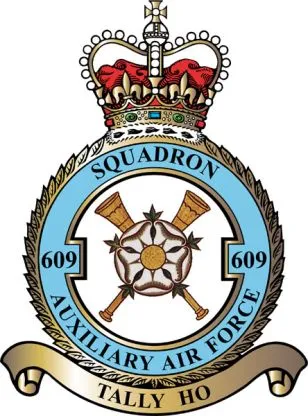 No. 609 Squadron was formed on 10 February 1936 at Yeadon as a day bomber unit of the Auxiliary Air Force. It began to receive Harts in June and these were replaced by Hinds before the squadron was redesignated a fighter unit on 8 December 1938. No fighters were received until the arrival of Spitfires at the end of August 1939, with war only days away.

After defensive duties in the north, No 609 moved to south-east England in May 1940 and flew patrols over Dunkirk to cover the evacuation of the BEF. It remained in the south throughout the Battle of Britain and began taking part in offensive sweeps over France in February 1941. In April 1942, Typhoons started to arrive and began operations on 30 June, being used mainly for defensive patrols. Day and night intruder sorties began to be flown in November and on joining Second TAF in March 1944, No.609 adopted rockets as its main weapons. In preparation for the invasion of Europe, the squadron attacked enemy communications and radar stations, moving to Normandy in June to provide the 21st Army Group with air support. After the breakout from the beachhead, the squadron moved forward to the Low Countries and for the rest of the war flew armed reconnaissance sweeps over Germany. On 15 September 1945, the squadron was disbanded.

Gun camera film shows tracer ammunition from a Supermarine Spitfire Mark I of No. 609 Squadron RAF, flown by Flight Lieutenant J H G McArthur, hitting a Heinkel He III on its starboard quarter.

A SHORT HISTORY OF 609 SQUADRON BORROWED FROM A RE-ENACTMENT GROUP IN THE UK (106/609 Squadrons, a subgroup of the Northern Forties Re-Enactment Group.0 www.northernforties.org.uk

The squadron was formed in February 1936 at RAF Yeadon as part of the Auxiliary Air Force. As it was the custom with Auxiliaries to be associated with a City or County, 609's affiliation was to the West Riding of Yorkshire.

The squadron was originally a light bomber unit equipped with Hawker Harts, Hawker Hinds and subsequently Fairey Battles. On 8th December 1938 it was transferred to Fighter Command. It was not equipped with fighter aircraft until August 1939 when it received Supermarine Spitfire Mk 1s. In May 1940, the squadron flew sorties in support of Operation Dynamo - the evacuation of the British Expeditionary Force from Dunkirk. One third of the squadron's pilots were lost during a 3 day period.

In the Battle of Britain, the squadron operated from Middle Wallop, with half the squadron operating from the forward base at Warmwell. During August 1940, the squadron destroyed 46 enemy aircraft but nearly all the pre-war auxiliary pilots were lost, either killed or missing. In October 1940, 609 became the first squadron to achieve 100 confirmed aerial victories. In February 1941, the squadron move to Biggin Hill and many of its pilots were foreign nationals. There was a particularly high proportion of Belgian pilots in the squadron. The squadron went on to take part in many operations over France as the allied air forces went onto the offensive.

The squadron was ultimately re-equipped with the Hawker Typhoon and specialised in the ground attack role. They flew many missions in support of the D-Day landings and continued to operate in Europe until the end of the war, ending their time at Plantlunne in Germany.

One of the squadron's original Spitfires is now preserved in the Battle of Britain Hall at the RAF museum, Hendon - a fitting tribute to those pilots who gave their all in 1940. Gun camera film shows tracer ammunition from a Supermarine Spitfire Mark I of No. 609 Squadron RAF, flown by Flight Lieutenant J H G McArthur, hitting a Heinkel He III on its starboard quarter