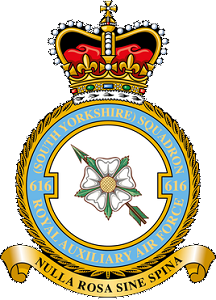 No 616 Squadron was formed on 1 November 1938 at Doncaster and was designated a fighter unit on 15 November.

It gave up its Hinds for Gauntlets in January 1939 and from May 1939 had four Battles for training duties in preparation for the arrival of Spitfires. It was not until October that the latter arrived, conversion being completed in November. As the end of May 1940, the squadron began operating over Dunkirk and during the first part of the Battle of Britain it was based in Yorkshire, moving south in mid-August. In April 1941. No.616 began to fly sweeps over France which continued until October. These were resumed in July 1942 with high-altitude Spitfires.

From March 1943 onwards, it spent most of its time in south-west England and on 12 July 1944 received the first Meteors to enter squadron service. On 27 July the squadron flew the first operational sortie by a Meteor when it engaged flying-bombs launched against southern England. In February 1945, a detachment was sent to Belgium and at the beginning of April the whole squadron moved to the Netherlands, beginning ground attack missions on 16 April. The war ended a few weeks later and the squadron was disbanded on 29 August 1945.