Don Andrews and the Gremlin logo on his Spitfire

Don opened the conversation with a comment that he had a charmed life - always in the right place to get promoted or the best jobs. A modest statement in light of the times he had while combating the Luftwaffe in the skies over England and Europe.

Don, a Queenslander, enlisted on the 8th November 1940 and soon found himself at Bradfield Park, NSW and was then shunted off to Narranderra where he learned to fly Tiger Moths. In no time he was on a ship bound for Canada and found himself at Camp Borden, Ontario. He was destined originally for twin engine aircraft training school, but was given the opportunity of volunteering for single engine aircraft. He was granted his Wings and commissioned at SFTS (Service Flying Training School) where he flew Harvards and Yales. He was then shipped off and bound for England via Iceland and arrived at Llandow (Wales) where the Station Commander was GPCPT Taffy Jones, OTU Spitfires.

Short of instructors, he was given the opportunity of serving as an instructor for one term and then could be granted any Squadron he would like to go to. After his term as instructor he was granted his wish and ended up in 615 Squadron, flying Hurricanes. He was then posted to Manston in Kent and thence to Wales, close to where the famous RAAF No 10 Squadron (Sunderlands) was based. He was then moved on to Middle Wallop aerodrome, a night fighter base, as a pilot on Hurricanes in 245 Squadron. He enjoyed his stay there, and Don, as an aside, mentioned, “I was always keen on flying even as a kid, and used to sit in a tree and pretend I was a pilot”. He certainly got his wish.

Don was promoted to Flight Commander 175 Squadron Hurricanes, and was involved in dropping bombs on coastal shipping and even took part in the Dieppe Operation. The shipping was usually non military but well supported by armed escorts with plenty of flack. These Axis ships were mainly cargo, steaming up and down the Channel.

Later he was to join 453 Squadron as Flight Commander, where he was to replace Bobby Yarra. Yarra had recently returned from Malta and was shot down and killed in action. Don said that Bobby Yarra’s younger brother later came to the Squadron and he also lost his life on operations. In time, Don moved from Warmwell to Southend. He and sixteen Hurricanes, some carrying bombs, were involved in the support of bombers such as Mitchells, Liberators and Fortresses mainly over enemy held France.

Don was loath to speak about too many of his scrapes but did mention that on one occasion he was separated from his Squadron and was jumped by six enemy aircraft. He got peppered, but managed to bring down one of the enemy planes. He said, "It all happened so fast, but I claimed one of the FW 190s and received the DFC for this action”.

Operating from Perranporth in Cornwall, Don, as 453 Squadron Leader, was leading seven Spitfires on an offensive sweep near Brest, France when the Squadron achieved it greatest single victory. They had almost reached their turning point at 0830 hrs, when eight Me110s were seen in formation low on the water. As the Spits dived to intercept, the enemy scattered but were easily brought to combat and five were shot down, two by F/O Pat McDade, two by P/O Rusty Leith and one by Russ Ewins. Soon afterwards engine trouble forced Russ Ewins to bale out over the sea. About an hour later, two Spitfires flew around about five miles to the South and one was piloted by Don and the other one by Ross Curry. They pin-pointed where Russ was splashing around and luckily for him he was soon rescued. (The photo is of 453 Squadron at Ibsley in July 1943.)

Don was to also serve in ops against the V1 ad V2 sites in France. He said that there was not a lot of troublesome AA as he was flying a Spitfire which was manoeuvrable and could avoid a lot of incoming fire but he was very sorry for the boys in Bomber Command who took some losses.

On the Spitfires Don and his Squadron sometimes carried bomb loads which consisted of high explosives 1 X 500 lb and or 2 X 250 lb bombs. Don ruefully said, “If your bombs did not release over the target you had to bring them back home. Then you had to land with them and much faster than you would wish and make sure it was as smooth a landing as possible”.

He moved from a small grass drome called Southend to Hornchurch, a very important field during the Battle of Britain. Then was moved on to his next posting to Ibsley and was later stationed at Perranporth. Kell Barclay the CO was posted back to Australia and Don was promoted to Squadron Leader and became the Squadron Commander.

Later the Squadron was transferred to Skeabrae in the Orkneys Islands for rest. They rested alright as the place averaged 60 mph winds and as a consequence they did not do a lot of flying over the three months they were there.

His next move was to Detling, South East England and many of the operations there involved accompanying bombers. A typical flight was where the two squadrons, 451 and 453, would take off together and then after escaping the cloud cover would reform at 15,000 feet. They would give as much protection as possible to the American Bombers until fuel became low. Then the two Squadrons would peel off and the Radar people would give them directions to find their way down for the Wing to land. The Luftwaffe was not too active and was not coming out so much at this stage in 1943. They were occupied elsewhere. Don said, “We didn’t have a lot of interruptions, as the Luftwaffe pilots were busy protecting the skies over Germany.”

As he was due for a rest having served in Operation flights of two and a half years in Fighter Command, he was sent to Central Gunnery School as an instructor. In February 1945 he was back on operations at a small aerodrome, called Matlask, and was attached and was to lead the Australian Wing (451 and 453 Squadrons) as Wing Commander.

On his first operation after returning from rest, Don had his number 2 wingman, Blake, shot down but he managed to parachute to safety. Then a short 10 days later his next wingman was also shot down bailing out successfully. Don laughed and drily commented that, “They were aiming at me but kept on hitting them!”

In April 1945, Don found himself in Lympne, Kent and was living in luxury there with his own quarters. The War was soon to finish and after staying in England for a while he was shipped back to Australia and eventually made his way back home to his family in Southport, Queensland.

When questioned, Don said that he preferred flying Spitfires as he considered them vice free whereas by the later years of the war the Hurricanes had been superseded. He also flew Mustangs which he thought were marvellous, but heavier to manoeuvre and more solid than a Spitfire. He even tried out a Thunderbolt (nicknamed the Jug) and found them also very comfortable. Other aircraft flown were Vultee Vengeances and Tempests. The last photo is of Don when he was Wing Commander of 453 Squadron at Cornwall.

Don had one victory, one probable and several damaged.

He was discharged on the 5th April 1946 and resumed a quieter civilian life. He rejoined the Commonwealth Bank of Australia, eventually retiring in October 1983. Learn more about the squadron/s in which Donald served. 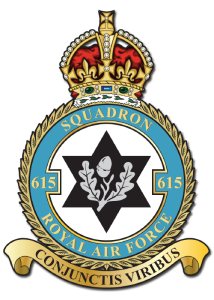 No 615 Squadron was formed on 1 June 1937 at Kenley as an army co-operation unit of the Auxiliary Air Force. After flying Audaxes and Hectors, it became a fighter squadron on 7 ...