I joined the RAAF as a pilot in November 1941 and got my wings as a bomber pilot after one year's training in Australia. I sailed on SS West point to San Francisco with 400 pilots we went across America by train over 10 wonderful days and went into "Camp Myles Standish" Massachusetts for 2 months.

I left New York on the "Esperence Bay" with 50 other pilots on 6/3/1944 in a convoy of 30 ships, which were attacked by a pack of U-Boats on the second night out. Many ships were sunk and convoy dispersed but our Aussie Captain took us north of Iceland into ice floes and icebergs. We arrived in Liverpool UK 10 days later and travelled on to Bournemouth on the Channel coast, which was then the Australian Aircrew base in UK.

Shortly after we had a "hit and run" air raid when 20 low flying Messerschmitts bombed and strafed our installations and accommodation. I had just left my two friends who were in a building that took a direct hit and I never saw them again. This was the first of what was to happen so many times in my flying career. One had to learn to live with it but one never really gets over it.

I was then posted to Kidlington in Oxfordshire flying Oxfords on a refresher course and when the course was finished we were posted to an O.T.U on Wellingtons, there were 3 of us remaining. The station C.O. explained that there was now a rule on leg measurements and we three did not comply. He offered me day fighters which I readily accepted and so I was posted to a conversion course on Miles Masters at an A.F.U at Tern Hill in Shropshire after which I was posted to Egypt and another sea voyage on the "Monowai".

Finally I found myself on an operational training unit in the desert at Abu Sueir, a complete change from beautiful England, and to my joy flying Spitfires and earmarked for 451 squadron R.A.A.F, that had been in early Desert campaigns including having a flight inside Tobruk and were now in Corsica operating over Italy.

On the completion of the course I was flown to Naples and then went on to an airstrip at Sinello on the Adriatic coast, just behind the front line, for a week's familiarisation.

I then flew to Corsica and 451 Squadron which was now under the command of the U.S. Tactical Air force who were flying "Liberator" bombers which were attacking bridges being used by the retreating Germans.

For the next 4 months we escorted them to their targets and as well our job was to do low level strafing on all forms of transport. In that period we destroyed or damaged 427 trucks including troop transports, 7 locomotives and 7 ships attacked. We also shot down 12 aircraft and destroyed many on the ground. These figures were from squadron records. At this time we lost our C.O S/L Wally Gale who was shot down near Florence.

In a last ditch throw the Luftwaffe attacked our base with 40 J.U.88's using anti-personnel bombs killing 8 of our Squadron and injuring 11 others. It was a sad next day when the 8 were buried.

Shortly after we participated in the invasion of Southern France in a beach-head landing by L.S.T (Landing Ship Tank) near Toulon. When General Patton's "armada of ships" came up from North Africa we had covered them for two days before.

The squadron was now operating from Cuers, a permanent French aerodrome and we were now operating over the Northern Italy region on targets we could not reach before. I was now also flying as 2nd pilot on a B25 Mitchell Bomber which was used by the wing for communications so my previous training had become useful after all.

It was October 1944 and I was now a Warrant Officer. The squadron was then recalled to England for a special mission. We arrived at Hawkinge Kent and received new Spitfire XIV's and were to become dive bombers!

At the time the Germans were using V2 rockets released from the Dutch coast and striking London with devastating results, wiping out whole blocks at a time and with no warning. Turning a Spitfire into a dive bomber was like turning a racehorse into a draught horse, but it did the job! After practicing for a week from Manston on tidal-exposed sands with smoke bombs we moved to Matlaske Norfolk.

As we approached the Dutch coast on our first operations we watched a V2 rocket come right up in front of our flight and disappeared into the stratosphere. Its slipstream tossed our aircraft around like toys! It would have landed three minutes later in London! It was the only one we ever saw in flight. A V2 then looked just like a Rocket on today’s launching pad at Cape Canaveral. What we saw then was the beginning of the Space Age! At the end of the war the German inventor Werner Von Braun was taken to the USA to head the Space program based on German Rocket technology.

For 3 months we bombed the sites daily and railway lines leading to them. When the Army overran Belgium we were able to fly there after Holland to a landing strip, refuel and rearm and do a second operation on the same day. A Rocket site in a racecourse at "The Hague" was heavily defended and they put up a carpet of "flak" at 5000 ft which we had to dive through to drop our bombs. We lost 2 pilots there. Fortunately when allied forces advanced into Holland our job was over.

Finally we escorted Lancasters bombing Germany by us flying to Holland, now in Allied hands, staying overnight and covering them right to their targets in Germany. Then came "VE" day on 12th May 1945. I was now a Flying Officer and I noted in my logbook that over one year and 3 months on 451 I had completed 54 operations. Then the Squadron was sent to Germany with the Occupation forces. One day my C.O. invited me to accompany him to inspect the Belsen Concentration Camp which was nearby.

We were fumigated on entering and again on leaving, only one hut was retained, the rest had been burnt. But the ovens were still there. What remained undeniably in my mind was a pile of shoes about 20 feet high like a pyramid, which said so much!

A sign outside the gate said: "This is the site of the Belsen Concentration Camp liberated by the 11th Armoured Brigade of the British army of the Rhine on the 15th of April 1945. An example of German kultur. " George Purdey, and Joe Barrington on the right 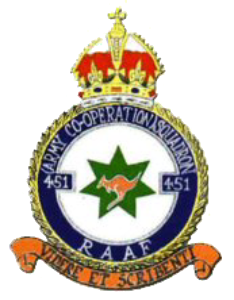