Bob Cunningham was born at Manly, N.S.W. on the 12th of May, 1920 although when he enrolled in the RAAF Reserve in May 1940 he was residing with his parents at Chatswood. He received his call-up to enlist with the permanent RAAF on the 16th of September 1940 when he was working as a salesman in the city. Prior to joining up, Bob had spent two years as a member of the 7th Field Brigade so service life was not a new experience for him. Immediately after completing his enlistment formalities at No.2 Recruiting Centre, he was dispatched to the Initial Training School at Bradfield Park to complete his rookies, a course that lasted about two months.

After the assessment process at No.2 ITS, he was selected to train as a pilot and was posted to No.6 Elementary Flying Training School at Tamworth where he mastered the Tiger Moth.

After this Bob commenced the next phase of learning to become an RAAF pilot by completing his service flying training at No.3 SFTS, Amberely, Qld and No.2 SFTS Wagga Wagga, NSW where he was taught to fly the much more complex Wirraway.

As a member of the Empire Air Training Scheme Bob, was selected to head overseas to the U.K. to complete his operational training. Towards the end of July, 1941 he was posted to No.2 Embarkation Depot to await transport to England. At this time he was promoted to Sergeant Pilot.

Two weeks later his big adventure began. He sailed from Sydney on the troopship Awatea on 8 August, 1941 and travelled to Vancouver. From there it was a transcontinental trip on the Canadian Pacific Railway to Halifax, Nova Scotia.

A more dangerous journey across the Atlantic followed and he finally landed in England at the end of September, 1941 where, after three weeks at No.3 Personnel Receiving Centre, Bournemouth, Bob was sent to do his advanced flying training at an Operations Training Unit. Refresher courses on Miles Magisters and Miles Masters honed his flying skills to the point where he could complete his conversion to Spitfires. This course lasted about three months.

Bob's first operational posting was to No.65 (East India) Squadron, RAF which was part of No.11 Fighter Group. This squadron flew Spitfires and had a proud history of offensive action during the Battle of France and of defending England during the Battle of Britain in 1940. Bob spent approximately eight months with No.65 Squadron, part of the time being stationed at RAF Debden in Essex. It was October, 1941 and he was based with 65 Squadron R.A.F Debden, Essex. During this time Bob was a night fighter pilot flying Black Spitfires.

In mid December, 1942 he returned to Australia disembarking at Melbourne where he was re-appointed to the RAAF. By September, 1942 Bob was promoted to Section Leader, 501 Squadron R.A.F. In 1943 Bob was back in Australia at the (2 OTU) Operational Training Unit at Mildura where he undertook the training of other pilots. He was later posted to 457 Squadron R.A.A.F. Darwin.

In early January the following year Bob joined No.2 OTU at Mildura and at the beginning of February he was promoted to Flight Sergeant. In March he was posted to No1 Fighter Wing and later became a member of No.457 Squadron which had established its base at Livingstone airstrip, fifty kilometres south of Darwin on the Stuart Highway. He remained with the squadron for about nine months and during this time he experienced some operations against Japanese aircraft. He was promoted to Pilot Officer in June, 1943 and Flying Officer in November the same year.

Throughout 1944 Bob experienced a variety of postings to RAAF units. These included a stint back with No.2 OTU, Mildura as an instructor and later No.8 OUT Parkes in a similar role. In December he attended a radar school and later, in April 1945, he was posted to 110 Fighter Control Unit as a controller. During 1945 Bob was posted to 110 (MFCU) Mobile Fighter Control Unit at Morotai where he was a Controller. His last posting was to Balikpapan, Borneo with an echelon of 110 MFCU which saw service in the landing with the 7th Australian Division.

Soon afterwards he received his promotion to Flight Lieutenant. No.110 FCU later became Air Defence HQ Morotai and as a member of this unit Bob played a role in the 7th Division's landing at Balikpapan.

Bob received his discharge from the RAAF on 15 March, 1946

Bob enjoyed a number of experiences the RAAF offered. As well as flying he took part in stand down activities especially those involving sports such as swimming, cricket and softball. Whilst in England he was introduced to the light orchestral music of Annunzio Mantovani and attended at least one of the orchestra's performances. But his real brush with fame was meeting a budding actress Deborah Kerr who at one stage was engaged to a squadron mate, Tony Barclay.

In total, Bob gave five and a half years of his life to service in the RAAF and clocked up almost four hundred and fifty flying hours, two hundred and fifty of which were spent in Spitfires. He was a popular officer and is remembered as a man who was always there to help out. He was discharged 15/3/1946 after a very busy time.

Bob was a loyal and enthusiastic member of the Spitfire Association. In 1967 as Vice President of the Association, he was very keen to have the wives and girlfriends of the members invited to the Annual Commemoration of the Battle of Britain. This was the first time women had been invited as guests to join in a celebration. The Music Hall at Neutral Bay was booked out. All enjoyed a memorable evening.

Another notable occasion was in 1981. Many would remember the wonderful reception Bob organised at Gilbeys for Sir Douglas Bader and his wife. In 1991 Bob took his children on a voyage of nostalgia to England and Europe. They visited various airfields and loitered for a while in places which held precious memories for Bob. To his family, Bob was a fun-loving and utterly selfless person who gave thanks for every day as he lived it.

Bob died suddenly at his home on the 18th of October, 2005. He is very much missed by his wife, Pat and their children Catherine, Elizabeth and John. Requiescent in Pace 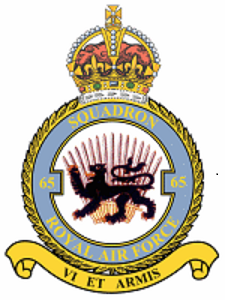 On 1 August 1934, No 65 reformed at Hornchurch with Demons but in September 1935 it began losing its personnel to drafts being sent to the Middle East during the Abyssinian cris...