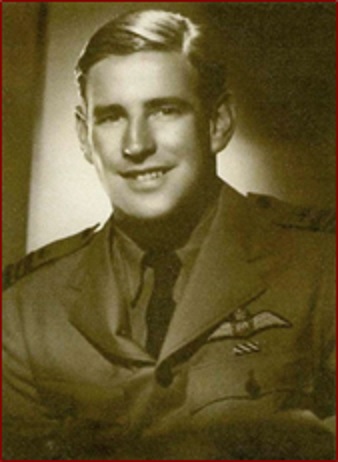 Ray was born on the 12/6/1918 in Sydney, NSW. He enlisted on the 27/5/1940 and for a time served in England. As with many of the RAAF serving in the European Theatre in those times they were required to come back to Australia to meet the Japanese threat.

The following two stories about Ray and his death on the 15 th March 1943, being shot down by two Japanese Zero's is in the North Australian operations when the Japanese airforce were in considerable strength.

Fred Woodgate writes, "Roman Emperor Julius Caesar and Squadron Leader Ray Thorold-Smith probably had little in common, yet both were warned of impending death, exactly 1899 years apart. According to Shakespeare, the earlier warning was "Beware the Ides of March", and the No. 452 Squadron, RAAF emergency call over the radio was, "Two Jap Zeros are after you!"

The 15th (Ides) of March was significant in Ray's saga.

Giving up the promise of a brilliant medical career when the completion of the course was almost in sight, Ray left Sydney University to enlist in the 2nd AIF on 15th March, 1940. He spent only 42 days in the army before transferring to the RAAF for aircrew training under the Empire Air Training Scheme.

One of the original officers of No. 452 Squadron formed in the U.K. and as an ace of Fighter Command's best performing unit, he was promoted Squadron Leader in the middle of March 1942, and decorated with the D.F.C.

Bringing his Squadron back to Australia, with No. 54, RAF and No. 457, RAAF, when our shores were bombed by the Japanese, he was soon in action again. Although No. 1 Fighter Wing was heavily outnumbered on the 53rd air raid over Darwin, Thorold-Smith led the attack on the bombers but lost his life when shot down. The date? – 15th March, 1943.

In the confusion of battle, the exact location of his crash was not observed, and as an extensive search failed to locate the wreckage, Ray has no proper burial-place.

Ray's home town, Manly, the popular Sydney seaside resort, is honouring persons of achievement; those who have contributed to Australia's development, in the form of Bicentennial Plaques. Ray's nomination has been approved by the Bicentennial Committee, and the cost, namely $1988 is being sought by public subscription. As trustee for the fund, I am pleased that good progress is being made. However, contributions are needed, and I would be happy to receive donations in the form of crossed cheques made payable to "Thorold-Smith Plaque". In the event of there being an over-subscription, the surplus will be used to purchase a portrait of Ray for permanent display in Manly.

Ray Thorold-Smith, by Ted Hall – "A" Flight Commander of 452 Squadron.

At the time I was Flight Commander ‘A' flight, 452 Sqn. and together with Tim Goldsmith D.F.C., D.F.M (my most experienced pilot) and the Squadron Commander Ray Thorold-Smith we were at RAAF Darwin for night readiness on the night of March 14/15, 1943. There was no enemy action that moonlight night!

The following morning (March 15) the three of us took off to return to Strauss strip. Shortly after becoming airborne the controller informed us of a large formation of unidentified aircraft approaching the coast west of Darwin.

We climbed to intercept them, eventually sighting some 25 ‘Betty' bombers with at least a 20 fighter escort. (This was some distance west of Darwin Harbour.) We came up behind the formation, still climbing wide line abreast. (I don't think they saw us until the C.O. fired at the rear fighters.) Tim was on the left. On the right were 5 Zeros behind the bombers.

I attacked the centre plane scoring hits. Suddenly, all of them turned incredibly tightly and attacked me. Somebody called to get out. Two Zeros, firing at me, followed my cork-screw dive for a 1000 or so feet. I called the C.O. without result and climbed above the formation with Tim. Then we employed tactics the Germans used against us in Europe until our ammunition was expended. By this time other Spitfires of the Wing were now in action. F/O Bill Lloyd was shot down but bailed out and Tim received a few holes in his plane from the first attack.

Our first contact with the Japanese Force was approximately over the west side of Darwin Harbour and before the bombing of the town.

I saw the C.O. fire and take evasive action when the fighters turned just before I attacked but saw no Spitfire go down smoking or in trouble. I did see one plane crash into the sea some distance from the coast but am sure it was a Japanese plane that Tim hit.

That day we searched unsuccessfully for our overdue Commanding Officer concentrating particularly west of Darwin and although 43 years is a long time I still remember this incident vividly.

Wondering why the thorough search undertaken at the time was unsuccessful I obtained details of the tides in Darwin Harbour for March 15, 1943 (a full moon period) and the figures covering the time of the action and subsequent are given below:

About the middle of December last I received some more information, this time from the RAAF Historical Section, Canberra whose assistance had been requested when my wife and I were down there in October doing some research. 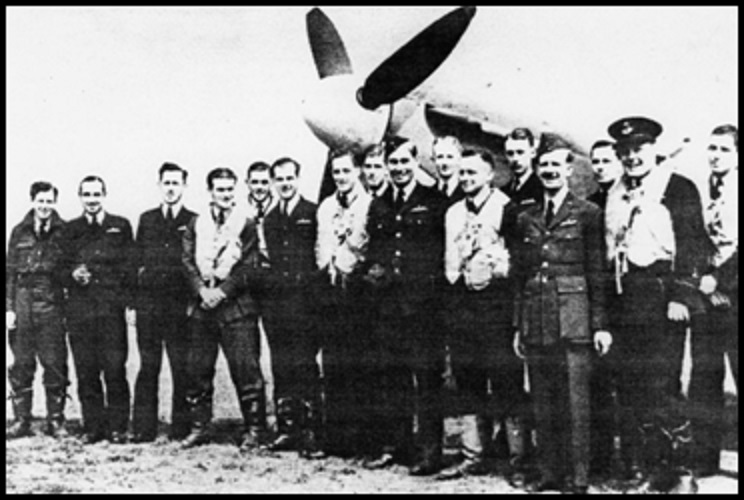 Ray eight from left in this picture of 452 Squadron pilots, England June 1941 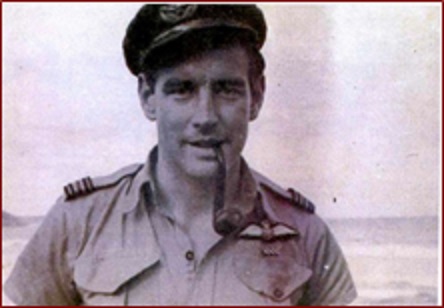