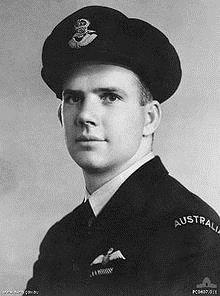 Adrian served with 234, 242, 126 and 452 Squadron. Note: Although some records show he had the rank of Acting Squadron Leader the Nominal Roll shows that he was a Flight Lieutenant.

Adrian was an Australian flying ace of the Second World War. Officially credited with shooting down 16¼ enemy aircraft while serving with the Royal Australian Air Force, Goldsmith scored 12¼ of his victories during the Siege of Malta. His final four victories were achieved against Japanese aircraft while conducting operations over the South West Pacific.

Goldsmith was born in the Sydney suburb of Waverley, New South Wales, on 25 April 1921 to Sidney Goldsmith, a timber merchant, and his English wife Philippa Mary (née Scott-Coward). Initially educated at Newington College, Goldsmith later attended Gosford High School following his family's move to Avoca Beach during the Great Depression. In 1937, aged 16, Goldsmith gained employment with the New South Wales Department of Works and Local Government as a clerk. [Wikipedia}

On 16 September 1940, Goldsmith enlisted in the Royal Australian Air Force for service during the Second World War. Accepted for pilot training, he graduated from his course and was posted to England in June 1941 with the rank of sergeant. During this time, he was briefly posted to No. 134 Squadron RAF and No.242 Squadron RAF. On 10 December 1941, Goldsmith married Dorothea Rosemary Britton in a ceremony at Tuckingmill, Cornwall. In February 1942, Goldsmith was posted to No. 126 Squadron RAF on Malta during a critical period in the Siege. Flying Hawker Hurricanes and Supermarine Spitfires during this time, Goldsmith managed to shoot down a Messerschmitt Bf 109 and damage another during an aerial engagement on 21st April; his own plane was damaged by a cannon shell fired by the third of four Bf 109s involved, partially jamming his ailerons. Within the first fortnight in May, Goldsmith had shot down a further six German and Italian aircraft and was subsequently recommended for the Distinguished Flying Medal. The announcement and accompanying citation for the award was published in a supplement to the London Gazette on 5 June 1942, reading:

The KING has been graciously pleased to approve the following awards in recognition of gallantry displayed in flying operations against the enemy: —

This pilot has destroyed at least 5 enemy aircraft. On one occasion he dived through a strong enemy fighter screen to destroy a bomber. When engaged by the fighters he shot one of them down.

Commissioned as a pilot officer on 15 May, Goldsmith conducted a sortie against an Axis shipping convoy approximately 130 miles (210 km) from his base on 15 June. During the engagement, Goldsmith attacked a large formation of aircraft and was confirmed as shooting down two aircraft; a CANT Z.506 and a Fiat BR.20, with a probable third (a Macchi C.200), within a space of ten minutes. For his efforts during this action, Goldsmith was awarded the Distinguished Flying Cross. The notification and citation for the award was published in a supplement to the London Gazette on 7 July 1942, reading:

The KING has been graciously pleased to approve the following awards in recognition of gallantry displayed in flying operations against the enemy: —

This officer is a skilful and courageous pilot. In June, 1942, during an attack on a convoy 130 miles from his base, he shot down 2 enemy aircraft. Since being awarded the Distinguished Flying Medal, Pilot Officer Goldsmith has destroyed 6 enemy aircraft, bringing his victories to 11.

Flight Lieutenant Adrian P. Goldsmith c.1944, by the end of his tour in July 1942, Goldsmith had amassed a tally of 12¼ aircraft shot down. Returning to England, he served as a flying instructor before proceeding home to Australia. In January 1943, Goldsmith was posted as a flight commander to No. 452 Squadron RAAF, which was operating out of Batchelor, Northern Territory, in the defence of Darwin from Japanese air raids. The unit later relocated to Strauss, near Darwin, in February. On 2nd May, Goldsmith was shot down and forced to bail out of his aircraft into the sea. After twenty-four hours in an inflatable dinghy, he was discovered and rescued.

Goldsmith was promoted to acting flight lieutenant in September 1943, by which time he had credited with shooting down four Japanese aircraft in aerial engagements. During 1943, Goldsmith's wife was reported as missing and presumed killed while on a voyage to Australia. In April 1944, he was posted to Mildura, Victoria, as a flying instructor. On 21 October 1944, Goldsmith attended an investiture ceremony at Government House, Sydney, where he was decorated with his Distinguished Flying Cross and Distinguished Flying Medal by the Governor of New South Wales. Two days later, he married Doris May McGrath, an Army nurse, at St Mary's Catholic Church, Concord, New South Wales. Promoted to acting squadron leader, Goldsmith was discharged from the Air Force on 31 May 1945 due to medical reasons. By this time, he had been credited with an official tally of 16 aircraft shot down as well as a quarter shared victory, and a further three probables.

On 25 March 1961, Goldsmith died of peritonitis at the Sydney Sanitarium and Hospital following an operation for ileo-caecal volvulus. Survived by his wife and son, a second son was born in October 1961. Goldsmith was cremation and his ashes were later scattered over the Timor Sea.

Re-settling in Burwood, New South Wales, Goldsmith gained employment as a salesman. In 1946, he was employed by Commonwealth Oil Refineries Ltd and travelled around New South Wales with his work. He was later made State marketing-manager for the company, and returned to Sydney.

Adrian Philip (Tim) Goldsmith (1921-1961), public servant, airman and business-manager, was born on 25 April 1921 at Waverley, Sydney, second son of Sidney Goldsmith, a native-born clerk who became a timber merchant, and his wife Philippa Mary, née Scott-Coward, from England. Called 'Tim' by his mother, he was educated at Newington College and—after the family shifted to Avoca Beach during the Depression—at Gosford High School. In July 1937 he took a job as a clerk in the New South Wales Department of Works and Local Government.

Moving to Malta in February 1942, Goldsmith joined No.126 Squadron, in which he flew Hurricanes and later Spitfires. On 21 April he shot down a Messerschmitt Bf 109 and damaged a second; during the first fortnight in May he destroyed six more enemy aircraft; his tally of German and Italian aircraft rose quickly. He was awarded the Distinguished Flying Medal on 15 May and commissioned that day. On 15 June he attacked a large enemy formation, destroying two planes and probably a third in only ten minutes. For this action he was awarded the Distinguished Flying Cross. When his tour ended in July, his 'kills' numbered 12¼. He subsequently received permission to wear a Maltese cross for his contribution to the island's defence.

Having spent a short term instructing in England, Goldsmith returned home and by January 1943 was a flight commander in No.452 Squadron, R.A.A.F. Between March and September, while operating from Strauss, near Darwin, he added four Japanese aircraft to his score. On 2 May he had been shot down: he parachuted into the sea and spent twenty-four hours in an inflatable dinghy before being rescued. Promoted acting flight lieutenant in September, he was posted to instructional duties at Mildura, Victoria, in April 1944. He was an acting squadron leader when his appointment was terminated on medical grounds on 31 May 1945. With 16¼ officially credited 'kills', he was one of Australia's top aces in World War II; his unofficial total was 19¼.

In 1943 Goldsmith's wife had been reported missing, believed killed, while voyaging to Australia. At St Mary's Catholic Church, Concord, Sydney, on 23 October 1944 he married an army nursing sister, Doris May McGrath. They lived at Burwood. A large man—6 ft 1 in. (185 cm) tall—with vivid blue eyes and an outgoing personality, he worked as a salesman. He joined Commonwealth Oil Refineries Ltd (later B.P. Australia Ltd) in 1946 and moved around New South Wales before returning to Sydney as State marketing-manager. Following an operation for ileo-caecal volvulus, he died of peritonitis on 25 March 1961 at the Sydney Sanitarium and Hospital, Wahroonga, and was cremated with Anglican rites; two years later his ashes were scattered over the Timor Sea. His wife, son and daughter survived him; a second son was born in October 1961. Ray Honisett's portrait (1987) of Goldsmith is held by the Australian War Memorial, Canberra. 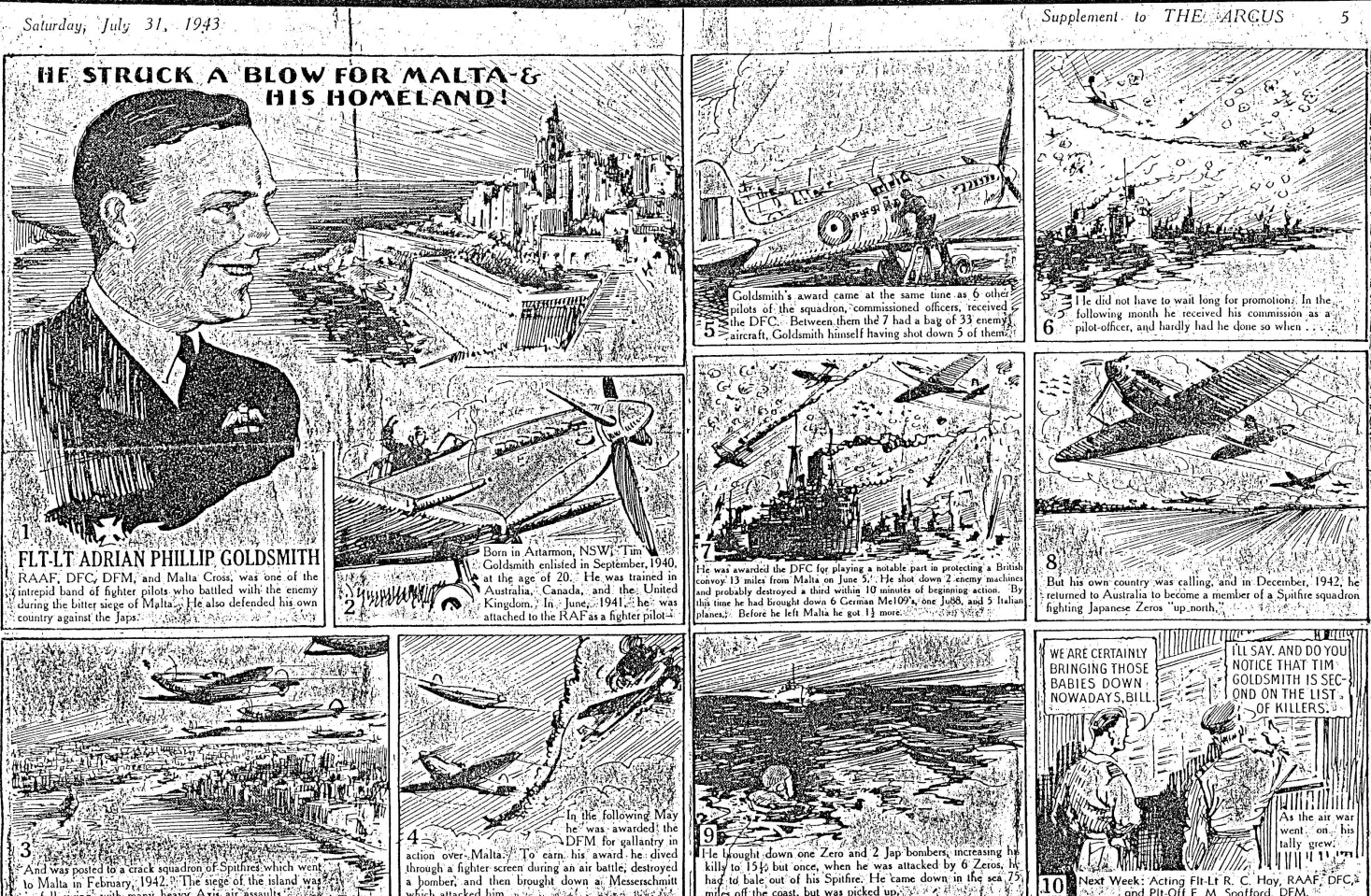 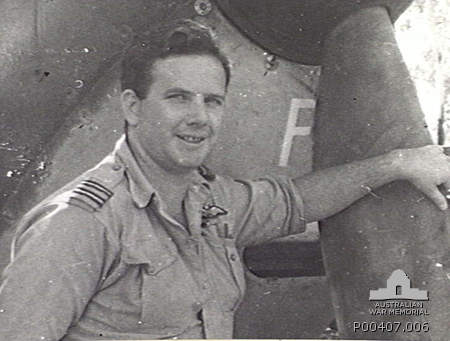 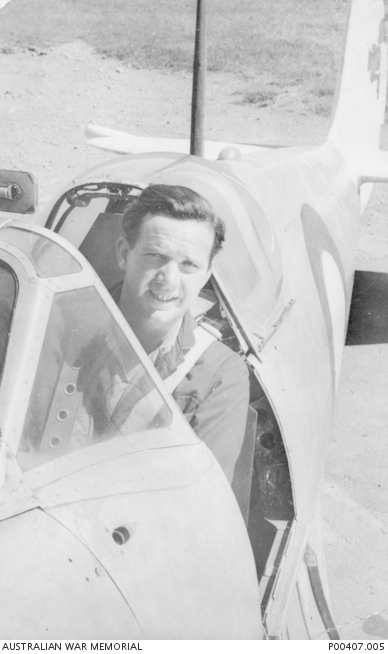 Learn more about the squadron/s in which Adrian served.